Trump Defends Washington Redskins: I Know Indians That Are Proud of that Name

Trump Defends Washington Redskins: I Know Indians That Are Proud of that Name 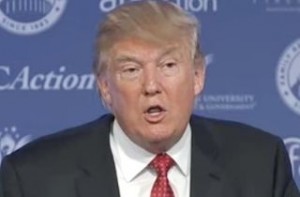 Donald Trump and Jeb Bush seem to have at least one bit of common ground: endorsing the Washington Redskins’ controversial name.

While the football team has been under government pressure and lost legal battles regarding their mascot over the past few months, The Donald told The New York Times that he supports the name and that it shouldn’t be changed. Trump reportedly described the commotion over the moniker as the latest in unnecessary political correctness.

“Honestly, I don’t think they should change the name, unless the owner wanted to,” Trump said. “I know Indians that are extremely proud of that name. They think it’s a positive.”

Trump laughingly said it was “progress” that he and Bush could agree on something, for despite all of their back and forth attacks on each other, Bush had a similar opinion last week that politicians don’t need to be involved on this issue.

Naturally, the Change the Mascot campaign released a statement showing that it was not impressed with Trump’s comments.

“It is hardly surprising that a candidate who labeled Mexican immigrants rapists and calls women ‘pigs’ now says he wants the NFL to continue slurring Native Americans. Donald Trump joins some of the NFL’s ignoble fraternity of billionaires who sit in their office suites and owners boxes happily spending their fortunes denigrating people of color.”