Trump Fans Target ‘Mike Cuckabee’ for Being a ‘Cuckservative’

Trump Fans Target ‘Mike Cuckabee’ for Being a ‘Cuckservative’ 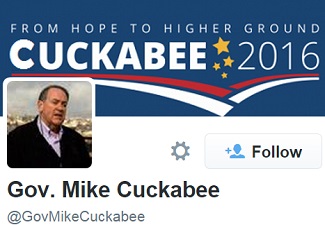 After months of bubbling away in the dark recesses of the internet, the term “cuckservative” broke big this past week as a way for white supremacists to mock any conservative who isn’t racist, anti-Semitic, or homophobic enough for them, which is all of them except Donald Trump. Even Mike Huckabee couldn’t impress them with his “Marching the Israelis to the ovens” remarks, and they have cleverly taken to calling him “Mike Cuckabee.”

So what does this have to do with conservatism or politics? By supporting immigration reform, criminal justice reform, etc., a white conservative is therefore surrendering his honor and masculinity (and it won’t be long before his women folk are compromised, as well!). A cuckservative is, therefore, a race traitor.

The suggestion is that whites should only support policies that help whites. The goal is to stir up fear among whites — and to encourage more tribalism and polarization.

After Lewis and I wrote about the term last week, use of the term exploded on social media, and lest you think Lewis is being harsh with his definition, you need only briefly peruse the #cuckservative tweets to glean their explicit racism and allegiance to Donald Trump. The group, which desperately needs a snappier name than “Racist Morons Who Say Cuckservative,” also got a big boost last week from radio icon Rush Limbaugh, who gave them an oblique shout-out on his radio show:

Trump was supposed to be history by now. And it was your host, El Rushbo, who said, “Whoa. Put the brakes on it, here. Wait just a second. We don’t know this yet, ’cause Trump’s not playing by the rules.” If Trump were your average, ordinary, cuckolded Republican, he would have apologized by now, and he would have begged for forgiveness, and he would have gone away. And the establishment would have claimed another scalp, claiming that they had protected the sanctity of campaigns.

The term’s sudden popularity prompted a BuzzFeed profile this week, which attempted to determine the origin of “cuckservative.” Aside from their terror of black and/or gay penises, these guys are also heavily invested in taking credit for their creation, but the earliest use I could find, from 2010, didn’t connect to them at all. Know Your Meme traces its current iteration back to September of 2014 on 4chan, and its use on Twitter to around April of this year.

Lewis’ exposé of “cuckservative” led to plaintive pleas from other conservative blogs, begging their readers not to mainstream “cuckservative” because it’s racist. The Breitbart crowd, however, is embracing it, because how is racism even a thing?

Well, it seems such librul race-hustlers as Redstate and The Right Scoop had no problem “unpacking” these:

A #cuckservative believes blacks have proven to the world how responsible & civilized they can be when afforded all the freedoms of whites.

Cuckservative PUAtip: Due to demographic changes in America, in the very near future women will come to expect being raped on the first date — The Cuckservative (@cuckservative) June 30, 2015

@the_new_heresy @ezraklein He should do a follow up story on the six million most brutal burns of the holocaust.

I can get behind donating to pizza places so long as the money goes to upgrading the ovens. We’re likely going to need them.

These are not outliers, they are typical of the folks who use the term, and they hate Jews every bit as much as they hate black people and gays. That’s why even Huckabee’s bid to draft on Trump’s popularity only netted him a Mike Cuckabee parody account and a whole lot of contempt.

The one fairly valid point that Breitbart.com makes is that the attention being paid to the “cuckservative” meme is disproportionate to the actual number of conservatives using it, and probably is largely motivated by a desire to tie its racist adherents to Donald Trump. Concern-trolling about conservatives adopting “cuckservative” has the added benefit of making Donald Trump radioactive in the process.

Breitbart’s solution, to adopt it anyway and insist it’s not racist, is probably for the best, because they never met anything that they couldn’t insist wasn’t racist. The conservatives who are offended by the term, meanwhile, are hopefully learning something about the racism they have alternately encouraged and tolerated all these years, now that it’s being used to take bank-shots at them.