Trump Responds to Obama: POTUS ‘Is Unfit’ and Clinton ‘Is Equally Unfit’

Trump Responds to Obama: POTUS ‘Is Unfit’ and Clinton ‘Is Equally Unfit’

The GOP nominee threw the commander-in-chief's words right back at him. 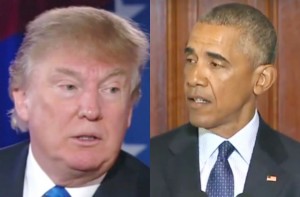 Donald Trump responded Tuesday afternoon to the president’s remarks at a presser, in which he called the GOP nominee “woefully unfit” to lead the nation.

In a statement attributed to Trump himself, the candidate threw the commander-in-chief’s words right back at him. He said that Obama “is the one who is unfit to be President and Hillary Clinton is equally unfit.”

“President Obama has been a failed leader who along with Secretary of State Clinton created a foreign policy that has destabilized the world and made it an unsafe place. He is the one who is unfit to be President and Hillary Clinton is equally unfit.

Obama-Clinton have single-handedly destabilized the Middle East, handed Iraq, Libya and Syria to ISIS, and allowed our personnel to be slaughtered at Benghazi. Then they put Iran on the path to nuclear weapons. Then they allowed dozens of veterans to die waiting for medical care that never came. Hillary Clinton put the whole country at risk with her illegal email server, deleted evidence of her crime, and lied repeatedly about her conduct which endangered us all. They released criminal aliens into our country who killed one innocent American after another — like Sarah Root and Kate Steinle — and have repeatedly admitted migrants later implicated in terrorism. They have produced the worst recovery since the Great Depression. They have shipped millions of our best jobs overseas to appease their global special interests. They have betrayed our security and our workers, and Hillary Clinton has proven herself unfit to serve in any government office.

She is reckless with her emails, reckless with regime change, and reckless with American lives. Our nation has been humiliated abroad and compromised by radical Islam brought onto our shores. We need change now.” – Donald J. Trump