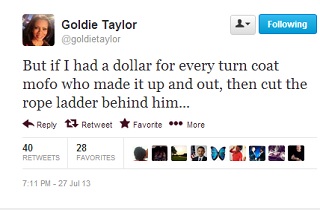 CNN anchor Don Lemon is getting a flurry of reactions on Twitter for his remarks in support of Fox News host Bill O’Reilly‘s repetitive demonization of black people, but perhaps none more tersely devastating than that of MSNBC contributor Goldie Taylor, who is more through with Lemon than a Country Time taster with a citrus allergy. While Lemon has retweeted some positive reactions, and a very negative reaction from a CNN guest, there’s little sympathy to be found in a Twitter search for Don Lemon right now.

Here’s what MSNBC’s Goldie Taylor had to say:

Just saw Fruitvale Station. Heard Lemon remarks. There is nothing I can say. Yet.

I just have to wonder. Exactly which America does he live in?

But if I had a dollar for every turn coat mofo who made it up and out, then cut the rope ladder behind him…

…they get to thinking that good money, good suits and good manners will make them see you differently…

I’ll tell you what though. If you step to the plate, your behind better be ready to take a pitch…

MSNBC Meliss Harris-Perry segment producer Jamil Smith took a different approach, tweeting that “If what O’Reilly said didn’t merit a response, I don’t think @DonLemonCNN taking it a step further does, either,” prompting a bemused “Huh?” from the network’s Chris Hayes.

Other reactions weren’t nearly so ambiguous. Here are a few representative tweets:

Anthea Butler: I was tired of @donlemoncnn when he was tweeting those wack prosperity sermons every sunday. Not surprised by this.

Valérie: Next racial draft we’re giving @DonLemonCNN to the whites. I don’t even wanna trade him for anyone. Just give him away

Sunja Montice: @DonLemonCNN must be real THIRSTY for him to try to speak for all AA’s and throw our black men under the bus. Are his ratings that bad?

It wasn’t all negative, though. Lemon did get props from Newsbusters‘ Noel Sheppard:

I wish Obama would have been as honest with his race speech as @DonLemonCNN was!

Other positive reactions were few and far between, but here are a few of them:

Michael Skolnick: tremendous about of respect for @DonLemonCNN but his “tough love” approach for black America forgets that some yng people don’t have “boots”

Brendon310: I think we need tough love I have to agree with @DonLemonCNN that its time to teach kids the right things to do.Thanks sir!

Ebong Eka: I’m baffled by the visceral reaction @DonLemonCNN is receiving for stating obvious problems in the community. People who own it, can fix it!

Buddy Love: Okay…I just saw what Don Lemon said…I don’t get why people are so offended?

Don Lemon, for his part, took the barrage in stride, wading in with a correction:

. @Heknowsmynam @CNN It’s @DonLemonCNN. Lemon with one M. Bring it. Thanks. #blacktwitter

Happening as they did on a Saturday, Lemon’s remarks will have all weekend to gain steam, and by Monday, a new conversation on race will begin. Lemon tried to qualify his remarks with some criticism of the political right, but the headline will be that a prominent black news anchor, one of the few, gave his stamp of approval to Bill O’Reilly’s one-sided, distorted view of the black community.