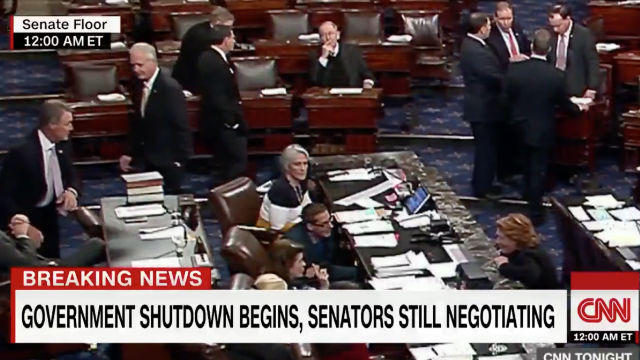 Earlier this evening, the Senate failed to collect the 60 votes needed to stop the government from officially shutting down on the one year anniversary of President Trump’s inauguration. Over the last few hours, members of Congress have gone back and forth scrambling to reach a deal willing to please both the Democrats and the Republicans.

Minutes before midnight Sarah Sanders released an official statement from the White house where the Trump Administration places the blame squarely on the Democrats, calling them “obstructionist losers:”

Twitter had a virtual mouthful to say about the chaos happening on Capitol Hill. Here are the best reactions:

It’s been a year, folks. And the first year ends with a shutdown. Stay tuned for season two.

And the 3rd shutdown of the federal government in the last 22 years begins…. https://t.co/8noml04E1q

Donald Trump’s government shuts down on the first anniversary of his inauguration.

Schumer and Graham just fist-bumped. Interpret that as you will.

And that completes President Trump’s first year in the Oval Office.

A year ago tonight, I turned off the lights in my office for the last time after 2,922 days. These clowns didn’t even make it a year.

Executive Time for everyone.

What if this #GovermentShutdown ?? means no WiFi @WhiteHouse ?? I am ok w/that! pic.twitter.com/kbkj3HEN9b

Shutdown Law is in effect. Protect your perimeter. Trust no one.

This is the largest audience ever to watch the federal government shut down–period! #TrumpInaugurationPlusOne

“This is not a test. This is your emergency broadcast system announcing the commencement of the Annual Purge sanctioned by the U.S Government.”

Pelosi: “Tonight, on the eve of the first anniversary of his inauguration, President Trump earned an ‘F’ for failure in leadership.”

If the government shuts down, it’s The Purge, right?

It is now midnight. The One Year Anniversary of President Trump’s inauguration has arrived. The Purge has begun.

The Government is shut down, except for essential personnel. All crime is legal until further notice.

Your non-functioning Government thanks you.

As I understand it, in fifteen minutes it’s basically THE PURGE.

So ready for the Purge!