Twitter got its snark on Thursday when a tweet from Slate about Trump’s pick for HUD Secretary Ben Carson was posted to social media with a picture of Gen. James Mattis instead. 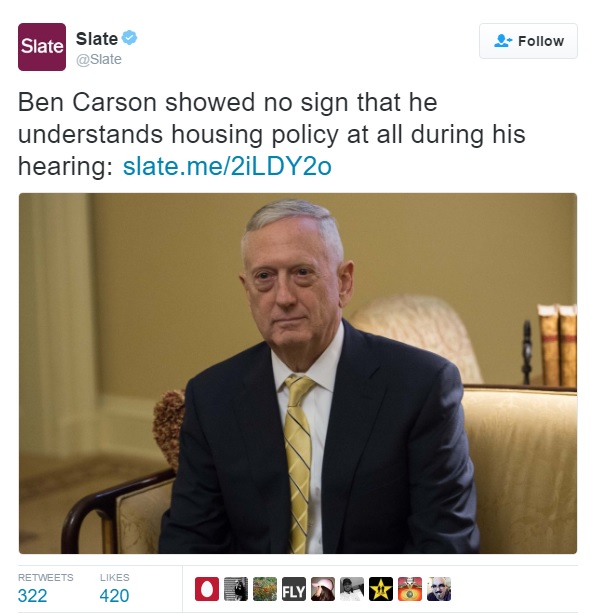 Carson does not particularly resemble Mattis. In a follow-up tweet, Slate issued a correction and explained that the piece they linked to was a live blog covering both men.

Correction: This tweet corresponds to an update in our confirmation hearings live blog. The man in the photo is James Mattis, not Ben Carson

Still, social media had fun with the mix up.

And at least those criticizing him as uninformed can tell the difference between Ben Carson and Jim Mattis oh wait apparently they can’t https://t.co/iEhcspfRam

Slate shows no sign it understands who James Mattis is https://t.co/20vGgf5kio

@Slate It might be bring your toddler to work day at Slate .

tfw you’ve served your nation for over 40 years and @Slate doesn’t even know who you are pic.twitter.com/caFvOSe1Zi

If you’re going to use Gen. Mattis, at least use the right picture @Slate. pic.twitter.com/BvQOkd7Iyb