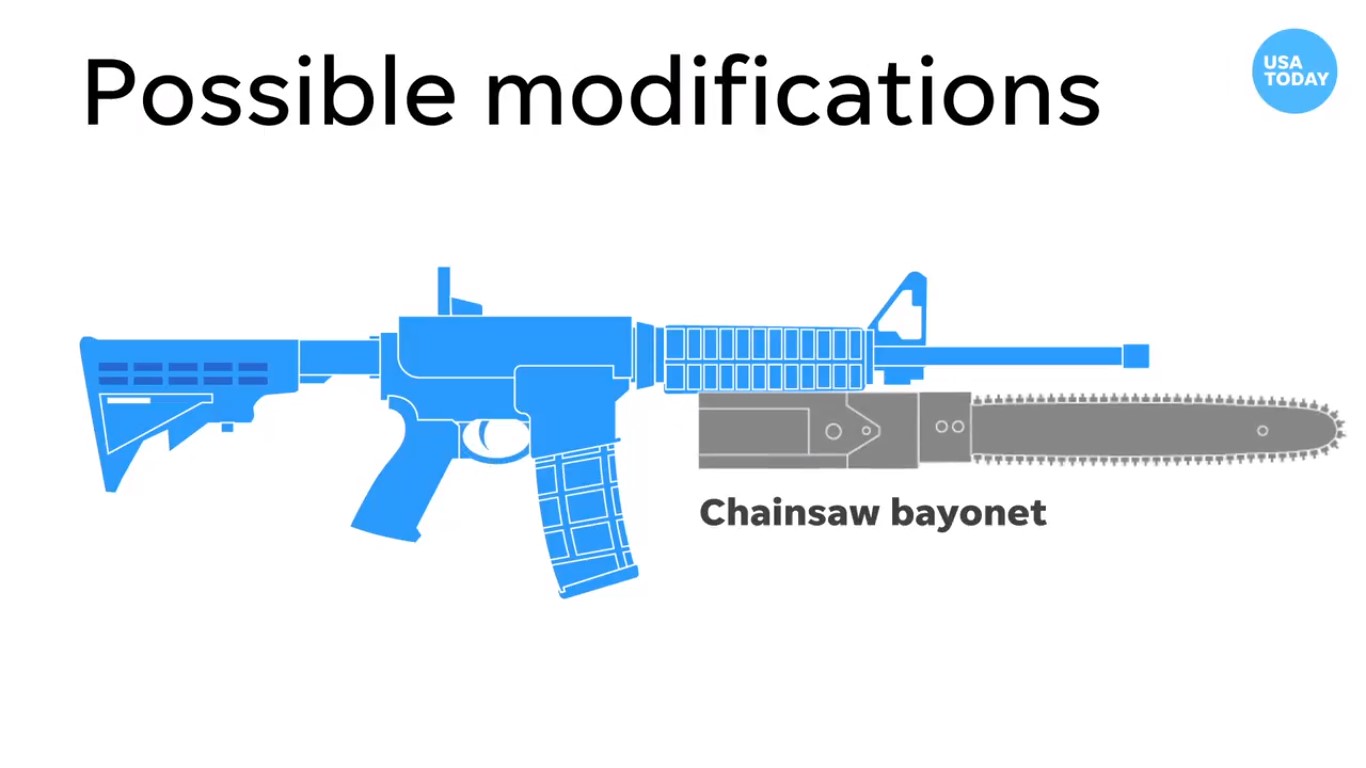 USA Today published a video today detailing the semi-automatic AR-15 rifle used in the Texas church shooting — however, there was one slight detail in their analysis that Twitter found to be a bit off.

In the clip, the outlet explains what gun the shooter used, what rounds it takes, and what modifications can be added, which included a “chainsaw bayonet.”

A look at the gun used in the Texas church shooting. https://t.co/xdxIf5fR77 pic.twitter.com/sUY1mCCLZC

To clarify, the video shows both the shooter’s modifications, as well as other possible modifications. The shooter did not use a chainsaw bayonet.

Even with the added clarity, Twitter wasn’t easing up on the paper for claiming a Gears of War style “chainsaw bayonet” was an attachment a gun owner would employ. What ensued was a heap of mockery, outrage, and parodies directed at USA Today for their AR-15 chainsaw gaff:

This crap is going to put me in an early grave. For the love of God… pic.twitter.com/VkuoGzMkX3

USA Today thinks you can attach a chainsaw to a gun ??? https://t.co/xhLfzOHcQj

And @loconservative provides the most terrifying weapon of all, one that will have us all crapping our pants pic.twitter.com/ixDK0ozAUJ

H/T @theyellowtub for this antique AR modification. Went out of production 65 million years ago. pic.twitter.com/MNVXIJ0YNT

Watch out for this modification: pic.twitter.com/R6uJ5zoxBw

Only in Trump’s America pic.twitter.com/24rpCxUOIe

no background check required, can you believe it pic.twitter.com/ZXGoxqYC1c

This is the world @ComfortablySmug wants us to live in pic.twitter.com/xi4e44cxa0

H/T @LisaDeP, who sends the most terrifying iteration of a rifle modification yet pic.twitter.com/lUZYzhV5jz

Honestly, I never wanted an AR-15 but now that I know I can attach a chainsaw bayonet to it I’m sort of motivated