Twitter Was Collectively Mortified by the Seahawks’ Neon Uniforms 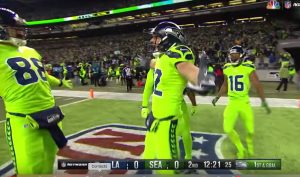 Throughout the season on Thursday Night Football, NFL teams have been wearing specially designed “Color Rush” uniforms. Some have been pleasing to the eye. Others have not. The Seahawks’ uniforms from last night fell into the latter category.

Seattle took the field in almost head-to-toe neon on Thursday night. Judging by the reaction on Twitter, the gimmick unis were not exactly a hit.

Don’t adjust the color on your tv. It’s fine. Those uniforms by the Seahawks can’t say the same.

Set up new Sony big screen. #TNF came up on it… I thought the TV was completely wrecked in transit !
Nope, was just new #SeahawksUniforms.

Behind the scenes: Making of Seahawks’ “Color Rush” uniforms… pic.twitter.com/p6Nz74oEmf

Are we allowed to talk about how the Seahawks color rush uniforms look like the green teletubby? #askingforafriend pic.twitter.com/xOIjpaRN1K

Three things that will burn your retina if you stare too long:
1. Solar eclipse
2. Laser pointer
3. @Seahawks #TNF #uniforms

What about those @Seahawks lime green uniforms last night? They looked like Martians. I couldn’t even watch!

Here’s a good laugh this morning. Twitter had some fun with the @Seahawks uniforms last night…#njmorningshow #ColorRush#nfl #Seahawks pic.twitter.com/rCezGmfaW5

The fashion police called & would like to Seahawks to Match their helmets with their new uniforms.

No to those uniforms #Seahawks #Q13FOX however Merry Christmas!?? pic.twitter.com/VHGvk3JexF

Those neon Seahawks uniforms = visual equiavalent of a root canal.

Tonight’s Seahawks color rush uniforms are beautiful– If you are a ’90’s raver who is trapped at EDC96. #LAvsSEA pic.twitter.com/74QHEA3JcL

My favorite part of the @Seahawks green uniforms is how they screwed with the first down marker. Least favorite? Literally everything else.

In case the lights go out, we’re good to go! #TNF pic.twitter.com/2FFjv9pYxG