Umar Farouk Abdulmutallab: What We Know So Far (UPDATE) 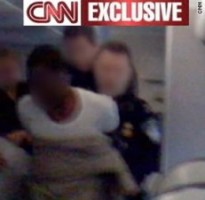 There are currently about ten results in Google for Umar Farouk Abdulmutallab (that number is well into the hundreds of thousands now), who Friday attempted to ignite some sort of explosive device on Northwest Airlines Flight 253. Here is what we know so far (UPDATES below):

More information as it comes.

He is the son of the recently retired Chairman of First Bank of Nigeria, Dr. Umaru Abdul Mutallab.

The Al-Qaida-linked Abdul Farouk Abdulmutallab is an engineering student at University College London. Saharareporters sources have revealed that prior to his sojourn in the UK, Farouk had studied at the prestigious British School of Lome, Togo. Where he passed his International Bacchalaureates Diploma before moving to UCL.
…
The younger Muttallab lives in a £4 million pounds apartment in Central London, although he is only a student. The apartment, Flat 16, no 2 Mansfield Street in London, W1G9NE is registered to a US company and has been raided by UK security agents today.

Family sources that declined to be named told Saharareporters that in 2008, Farouk has left the London school and frequented Yemen. He told his friends and relatives that he wanted to study Arabic, a decision that came after he reportedly met Islamic radical elements in London.

UPDATE (2:40 pmET): ABC News is now reporting that the attack was indeed planned by al Qaeda, in Yemen, where a terrorist expert “sewed bomb materials into the suspect’s underwear before sending him on his mission.”

Investigators say the suspect had more than 80 grams of PETN, a compound related to nitro-glycerin used by the military. The so-called shoe bomber, Richard Reid, had only about 50 grams kin his failed attempt in 2001 to blow up a U.S.-bound jet. Yesterday’s bomb failed because the detonator may have been too small or was not in “proper contact” with the explosive material, investigators told ABC News.

Investigators say the suspect, Abdul Farouk Umar Abdulmutallab, a 23-year old Nigerian student whose birthday was last Tuesday, has provided detailed information about his recruitment and training for what was supposed to be a Christmas Day suicide attack.