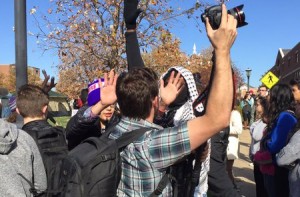 The Missouri University Police Department (MUPD) sent an email to students Tuesday morning urging them to call them and report any hurtful speech they encounter on the campus.

In an email that was flagged by several Missouri-based journalists, the MUPD asked “individuals who witness incidents of hateful and/or hurtful speech or actions” to call the department’s general phone line “to continue to ensure that the University of Missouri campus remains safe.” They suggest that students provide a detailed description of the offender, their location or license plate number, and even to take a picture if possible.

The University of Missouri is now threatening police force against speech. #Mizzou pic.twitter.com/rex4XcB7Z1

In the email, MUPD readily admits that hurtful or hateful speech is not against the law. But, they write, “if the individuals identified are students, MU’s Office of Student Conduct can take disciplinary action.”

In a statement to Mediaite, the MUPD confirmed that the email was real. When asked about the potential First Amendment implications, a spokesman responded simply, “We are simply asking them to report what they feel is hurtful and/or hateful speech.”

He added that the police did not consider the hateful speech “a criminal matter.” However, “We also work for the University and uphold the Universities Rules and Regulations.”

The email comes one day after University President Tim Wolfe and Chancellor R. Bowen Loftin resigned under pressure from students and faculty alike for what they considered a lackluster response to racial incidents. The same day, protesters and members of the media clashed, with protesters declaring a “no media safe space.”