UVA student Martese Johnson was arrested outside a bar just weeks ago, and ended up bloodied when the police pushed him down and his head struck the pavement. There was a rally held on campus that invoked the broader Black Lives Matter movement, and even the governor of Virginia called for an investigation. Keep that in mind as you take a look at this attempt at satire from UVA student newspaper The Cavalier Daily: 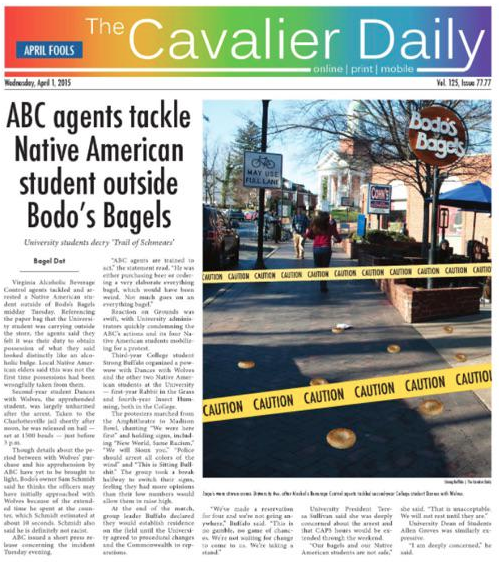 Yes, the student paper wrote, “The agents said they felt it was their duty to obtain possession of what they said looked distinctly like an alcoholic bulge. Local Native American elders said this was not the first time possessions had been wrongfully taken from them.”

There was a lot like that in the piece, including some fun with Native American names, but not everyone was laughing:

You gonna write an article about every other tragedy our school faced, or are we always the butt of the white man's jokes? @cavalierdaily

They also had a joke piece about a fraternity hosting a Rosa Parks party.

The Cavalier Daily took down both pieces online and apologized:

We understand that the arrest of our classmate Martese Johnson by Alcoholic Beverage Control officers was a highly traumatic incident both for the community and for Martese himself. In the days that followed, as we at the paper sought to comprehend what happened and provide the community with constructive reporting, we have felt upset, angry and confused alongside the student body. We are embarrassed that our empathy for these immensely serious issues was undermined by this piece. We had no intentions of victimizing another underrepresented community in the process.