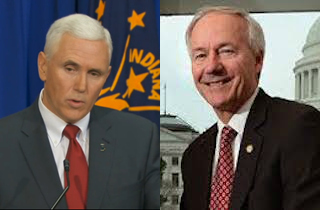 On Wednesday morning, Arkansas Governor Asa Hutchinson declined to sign the Religion Freedom Restoration Act bill his legislature just passed, a shift from his position of 24 hours earlier. Hutchinson instead sent the bill back to his legislature for changes that would bring it more in line with the federal version signed into law in 1993 by President Bill Clinton.

This is undoubtedly a victory for the various forces that controversialized a similar bill signed into law in Indiana last week, one critics say would effectively allow businesses to discriminate against gays and lesbians. The pushback caught Indiana Governor Mike Pence (R) by surprise, and led to an uncomfortable press conference yesterday in which Pence said he sought to clarify, though not necessarily change, the bill.

Why did the two Republican governors react differently to what was essentially the same legislation? For starters, Pence and Hutchinson are not exactly analogous as conservative governors, with Pence occupying a more anti-establishment space in the party that disdains compromise:

Hutchinson (a Bob Jones U grad) & Pence both social conservatives. But Pence much more anti-establishment, from his time in the House.

This was backed up by a scalding op-ed in the Indy Star today, in which columnist Matthew Tully scorned Pence as an ideologue in a pragmatist’s office. “A partisan and dysfunctional Congress that lives on bright line divisions was his home for 12 years, and that’s where he belongs,” Tully wrote, “in a place where a person can rise high by talking well and digging in and not really doing much.”

By contrast Hutchinson has gotten grief from the right flank of the GOP for being too “big government.”

Pence has also been mentioned as a future contender for the GOP nomination, and would more likely seek to burnish his conservative credentials, especially in a high-profile fight. (See also Walker, Scott and Christie, Chris.) Altering legislation in the face of what his supporters would see as liberal-led public pressure would render him anathema to the conservatives who greatly influence the GOP primary.

Hutchinson, who finally achieved the governorship this year after multiple failed campaigns, has no White House buzz around him, giving him slightly more flexibility when it comes to moderating controversial legislation.

Then there’s the Wal-Mart factor. The world’s largest retailer is headquartered in Bentonville, AR, where it employs thousands of workers, acts as a magnet upon other suppliers, and even accounts for excess tourism. Wal-Mart brings in more than six times the revenue of the next five largest Arkansas-based companies combined, and has similar clout.

This is not to say Wal-Mart dictates policy in Arkansas; the company unsuccessfully opposed a bill last month that would prohibit the expansion of LGBT protections at the city level. But with public attention already focused on Hutchinson, Wal-Mart CEO Doug McMillon’s call for Hutchinson to veto the legislation likely played a heavy role in Hutchinson’s decision.

Indiana has no comparable company to Wal-Mart. Though Pence faces increasing boycotts threats from everything from the NCAA to gaming conventions to Wilco, and has already lost a deal with Angie’s List in Indianapolis, no single strong business voice exists to pressure the governor.