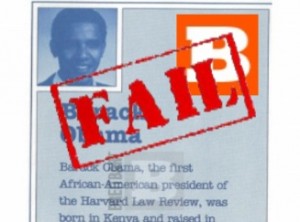 Yesterday, Breitbart.com’s Joel Pollak published the latest in the site’s ominous-sounding “The Vetting” series, which consisted of a short Barack Obama bio from a super-obscure trade pamphlet that erroneously said he was born in Kenya. While swearing to God this didn’t make them Birthers, Breitbart.com insisted that now-President Obama (stings, doesn’t it?) was behind the error, in a classic example of media manipulation. Then, the editor of that pamphlet completely destroyed their already-ridiculous theory.

In case you missed it, Pollak published an item on a 1991 trade pamphlet by a literary agent, for whom Barack Obama had yet to write any books, which said “Barack Obama, the first African-American president of the Harvard Law Review, was born in Kenya and raised in Indonesia and Hawaii.”

While publishing a lengthy disclaimer about how Breitbart.com’s senior management “believed” that “President Barack Obama was born in Honolulu, Hawaii, on August 4, 1961,” Pollak went on to claim that the error in that trade pamphlet was part of a grand design by Obama to reshape his image. Yes, because the best way to catapult the Obamaganda is in a one-paragraph bio in the middle of 89 other bios that will be distributed via publishing industry junk-mail. Genius.

The woman who edited that bio, however, blew a large hole in that already wafer-thin theory by issuing this statement to Taegan Goddard:

“You’re undoubtedly aware of the brouhaha stirred up by Breitbart about the erroneous statement in a client list Acton & Dystel published in 1991 (for circulation within the publishing industry only) that Barack Obama was born in Kenya.  This was nothing more than a fact checking error by me — an agency assistant at the time.  There was never any information given to us by Obama in any of his correspondence or other communications suggesting in any way that he was born in Kenya and not Hawaii.  I hope you can communicate to your readers that this was a simple mistake and nothing more.”

To Breitbart.com’s credit, they did try to contact Goderich prior to publishing their story, but since she has made her statement, they have failed to update their original story. Did they publish a follow-up post abjectly apologizing for making such an unfounded assumption about our 44th president? Not exactly:

Miriam Goderich, who helped edit a 1991 booklet for Barack Obama’s then-literary agency, Acton & Dystel, which erroneously stated that Obama had been born in Kenya, has issued a press release–first reported by her own client at Political Wire…

…The real mystery is not where Obama was born–which has long been settled–but why Goddard failed to ask her agent a single relevant follow-up question about how the ‘fact checking error’ occurred in the first place.

They’re not saying that Taegan Goddard is in on it, they’re just sayin’.

They devote part of that post, and another, to the fact that the error was repeated in subsequent editions of the pamphlet, and on the agency’s website, proving that Barack Obama is somehow, what? Behind the sinister invention that is “copy and paste?”

Don’t get me wrong, I’m not criticizing Breitbart.com for publishing the pamphlet; I’m quite certain it would have been a huge click-getter at Buzzfeed. I don’t even object to their accusation that Barack Obama has “manipulate(d) his public persona,” because that’s what every politician does. Obama is only different in that he wrote a whole book about it. The biggest problem with “vetting” Barack Obama is that he’s already done such a thorough job of it himself. How do you top cocaine? Maybe if Breitbart.com digs up a clip of Obama shouting “Say hello to my little friend!” they’ll be onto something.

Come to think of it, I don’t really object to any of it, even their desperate clinging to their discredited theory. “The Vetting” has certainly been an expose´, but not so much of President Obama as of Breitbart.com, although I do believe The Daily Caller deserves an honorable mention here. They dropped Goderich’s statement smack into the middle of their parroting of the original Breitbart post, but without changing any of the Obama-accusatory text that followed.

The so-called “birther” point of view was kept alive in 2008 by Obama supporters who slammed reporters investigating the issue, restricted access to his birth certificate and spent heavily to defeat lawsuits seeking a judicial investigation of the issue.

Did you catch that? Obama supporters kept the “birther” narrative alive…by slamming reporters who were investigating the issue. Can’t wait for their follow-up piece on how cops keep crime alive by being all anti-criminal and stuff. Also, Obama released a copy of his birth certificate during the 2008 campaign, and claims about the legal costs of defending birther lawsuits (originating from World Net Daily!) have been thoroughly debunked. Looks like the truth is just plumb Tuckered out.

So, what have we learned? Well, Barack Obama is still part Kenyan, and he’s still the President, and no matter how many black professors or assistant copy-editors they attack, there’s not much the Breitbart.com/Daily Caller nexus can do about it, and I bet that stings.