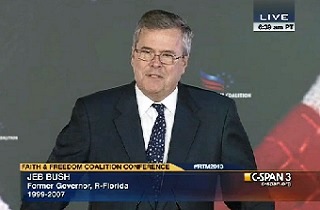 On the second day of the Faith and Freedom Coalition’s “Road to Majority” conference, former Florida Governor and possible 2016 presidential candidate Jeb Bush (R-FL) made one of the more unusual cases for comprehensive immigration reform. Speaking to the crowd about economic growth Friday morning, Bush said that not only do immigrants “create far more businesses than native-born Americans,” he added that “Immigrants are more fertile, and they love families, and they have more intact families.”

The comment has caused a social media firestorm, with both sides of the aisle piling on. His (somewhat variable) support for comprehensive immigration reform has not endeared him to many conservatives, while his familial pedigree makes him a ripe target for liberals. Here’s video of the controversial portion of Gov. Bush’s remarks:

The gaffe makes a little bit more sense in context, but only a little. The remark will rightly be thrown onto the “War on Women” bonfire as an attack on the barren American women in his imagination, but there are two fair points to make about the context. First of all, many will hear “Mexicans” when Bush says “immigrants,” but he does point out, earlier, that he’s not referring to race or ethnicity. However, he then points out that the “problem” Americans have with “fertility” is also plaguing “Eurpope” and “Japan” and “China,” so that kinda narrows down who he is talking about.

Secondly, he prefaces the remark by talking about the sustainability of programs like Social Security and Medicaid, in the context of America’s “fertility” problem. What he probably meant to talk about was “birthrate,” not fertility, or he think’s they are the same thing. Either he’s slagging “native-born” American women for being biologically inferior, or (more likely) he is slagging those American women for the choices they make, often out of economic necessity. Finally, there will be some Latino voters who will hear Gov. Bush promoting a cultural stereotype, voters the GOP already has a major problem with.

Choose your poison. Either way, American women are now more likely to heed The Guess Who/Lenny Kravitz, and stay away from him. Gov. Bush’s heart may be in the right place, but his mouth is way too close to his foot.