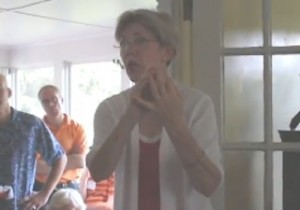 Watch out Scott Brown, your likely Democratic challenger for Ted Kennedy‘s former Senate seat seems to be touching a nerve, evidenced by a recent video that has quickly gone viral. Elizabeth Warren is the presumptive Democratic challenger running for Senate in Massachusetts, and a video taken of a campaign appearance has already been viewed almost 100,000 times since it was published last Sunday, and has spread like wildfire among the progressive community thrilled to see an aggressive yet plain-spoken defense of the very liberal values that have been under attack under is seen as the guise of “class warfare.”

Warren is a professor at Harvard Law who entered the public spotlight when she became the chair of the Congressional Oversight Panel, which was existed to oversee the U.S. banking bailout known as TARP. She recently announced her candidacy for U.S. Senate challenging Brown, and has been appearing at various homes throughout Massachusetts making her case. It was at one such appearance that the following video was taken and edited by an attendee not affiliated with her campaign.

While right-of-center critics might be quick to dismiss her anti-deficit rhetoric as more “blame Bush,” it’s Warren’s comments on the so-called “class warfare” that are resonating the most among progressives (transcript below via TheBlaze):

“I hear all this, you know, ‘Well, this is class warfare, this is whatever. No. There is nobody in this country who got rich on his own — nobody.

“Now look, you built a factory and it turned into something terrific, or a great idea. God bless — keep a big hunk of it. But part of the underlying social contract is, you take a hunk of that and pay forward for the next kid who comes along.”

“Social contract” is a phrase that should resonate across the the political spectrum, as it takes the onus of constructive behavior on the individual and away from the perceived “victimization” angle that riles the conservatives so much.