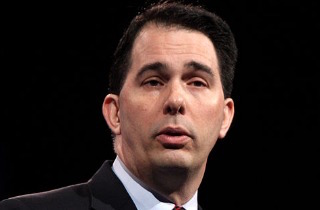 Perhaps the biggest controversy involving likely 2016 candidates this week involved Liz Mair, hired by Wisconsin Governor Scott Walker to be his digital communications consultant. It didn’t take long for the pile-on to commence, with Mair getting hit over her position on immigration and some less-than-flattering tweets she posted about Iowa.

It didn’t take long for Mair to resign, but last night Scott Walker publicly spoke out, albeit indirectly, to address the controversy.

RELATED: By Ousting Liz Mair, Scott Walker Panders to the Wrong Part of the Right

Walker delivered a speech in Greenville, South Carolina, and according to the Milwaukee Journal Sentinel, he made this very clear reference to the dust-up over Mair:

“One of my clear rules is, if you’re going to be on our team, whether on the paid staff or a volunteer, what I always say is you need to respect the voters,” he said. “Because really if you think about campaigns, it’s not about the candidate or the staff. It’s about the voter. It’s about how to help people’s lives be better.

“One of the things I’ve stressed… in the last few days as I’ve looked at the possibility of running is you have my firm commitment that I’m going to focus on making sure that the people on my team, should we go forward, are people who respect voters.”

The furor over Mair this week even reached the point where the head of the Iowa Republican Party called on Walker to drop Mair because of how she, in his view, insulted the people of Iowa.