WSJ: Obama 'Exploited' Us In TV Ad That Displays His 'Serial Dishonesty' 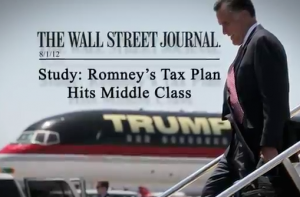 In an editorial today, the Wall Street Journal calls out President Barack Obama for a TV ad that asserts Mitt Romney will increase taxes for the middle class. Specifically, the editorial board took issue with the ad citing a WSJ article, and thus taking their “name in vain.”

“The President takes our name in vain to make a false claim,” the editorial contends, going on to recall the ad — which includes the following voiceover (emphasis mine):

Mitt Romney, he won’t reveal what’s in his taxes and he won’t tell you what he’d do to yours. To pay for huge, new tax breaks for millionaires like him, Romney would have to raise taxes on the middle class. Two thousand dollars for a family with children says a non-partisan report. You could lose the deduction for your home mortgage, college tuition, health care.

How much would you pay? Romney just won’t say.

During the emphasized portion of the voiceover, “this newspaper’s nameplate glides across the screen, with the text, ‘Study: Romney’s Tax Plan Hits Middle Class, 8/1/12.'” The WSJ then goes on to make the argument against the ad:

That would be a 250-word, four-paragraph item on the Journal’s Washington Wire blog, which merely informed readers of the existence of a Tax Policy Center study on the Romney tax plan. That’s the supposedly “nonpartisan report” the ad cites.

Since Mr. Obama’s ad makers had perhaps a million such uncritical blurbs to choose from, and most of them lacked straight-up-the-middle headlines, our guess is that they deliberately choose the Journal to associate Mr. Obama with this editorial page’s antitax credibility. It’s a subtle if familiar appeal to authority: “Even the Wall Street Journal . . .”

“Apart from taking our name in vain, the larger problem is citing a month-old blog post about what is a single and now discredited report,” the piece argues, noting that the authors of the report had made “selective and speculative assumptions.”

Contrary to that study, the WSJ noted another one released in August that concluded that “it is clear that the proposed Romney cuts wouldn’t require any middle-class tax increase” — and that the Tax Policy Center is wrong to say it would.

“We want nothing to do with that agenda,” it concludes, “but readers who see our name exploited in a TV ad should take it as one more sign of the Obama campaign’s serial dishonesty.”

Take a look at the ad in question, below: