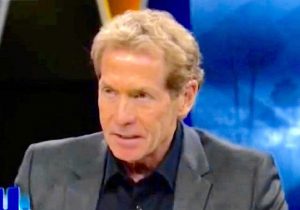 Well, maybe not so much.

On Monday’s edition of Undisputed Bayless gave Cowboys rookie quarterback Dak Prescott — who engineered a last-minute game-winning drive to beat Pittsburgh on Sunday to improve the Cowboys to an NFL-best 8-1 record — the highest praise he possibly could in comparing him to the greatest quarterback in the game.

“You want to talk about clutch gene?” Bayless said. “I’m already ready to put Dak up there in that rarified air with Tom Brady or Russell Wilson as a guy who’s showing me again and again, late in games, he is completely trustable.”

Dak Prescott has played nine NFL games. He’s off to a terrific start in his career. He’s led the Cowboys to the best record in the sport, and his 14-2 touchdown to interception ratio is excellent, even if the touchdown numbers don’t totally jump off the page.

But Tom Brady? After nine games? (Only four of which have coming against teams with winning records.) Seems just a tad premature. (It’s also worth noting that Prescott is blessed with outstanding skill position players such as fellow rookie Ezekiel Eliott, Dez Bryant, and Jason Witten, as well as an all-world offensive line.)

Bayless went on to call Sunday’s victory over a now 4-5 Steelers team, “a win for the ages.”

Okay then…Watch the completely level-headed take above, via Fox Sports 1.