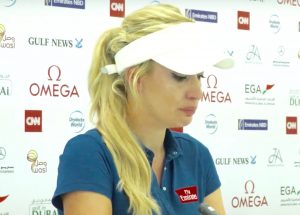 Paige Spirinac, a 22-year-old golfer who has played a number of professional tournaments and is working towards making the LPGA tour, has become well known thanks to a strong social media presence. But her visibility online has made her the target of cyberbullying, and Spiranac claims that she has been receiving death threats.

Spiranac opened up about the threats during a news conference in advance of her appearance in the Omega Dubai Ladies Masters tournament.

“I struggled with a lot of depression,” Spiranac said. She added, “It was really bad…I took about three weeks off, just not looking at anything. But when you see the comments that people say, they are extremely cruel. They attack not only me but my parents, my family, my friends, and you know, they say I’m a disgrace to golf.

Spirinac said she felt compelled to discuss the threats so as to offer aid to those going through similar experiences.

“It doesn’t matter how I play this week, it really doesn’t,” Spiranac said at one point. “But the fact that I’m here and I’m sharing my story, hopefully can save someone’s life, I think that’s so much more important than if I make the cut or miss the cut.”

It's not easy to talk about but awareness should be raised. You never know how your words will impact other people. #bekind #loveothers https://t.co/O75xY4NuyM

Watch above, via Golf Digest.