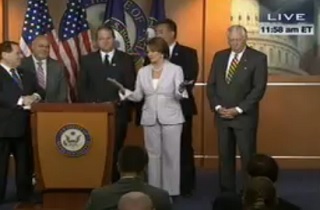 As the world reacts to the news that the Supreme Court has completely struck down the Defense Of Marriage Act, perhaps no two reactions encapsulate the direction in which the debate on marriage equality is headed. Ultra-conservative Congresswoman Michele Bachmann released a statement on the ruling:

“No man, not even a Supreme Court, can undo what a holy God has instituted,” Ms. Bachmann said in a statement. “For thousands of years of recorded human history, no society has defended the legal standard of marriage as anything other than between man and woman.” She said the court action “will undermine the best interest of children and the best interests of the United States.”

Asked to react to Bachmann’s statement, House Minority Leader Nancy Pelosi summed up what increasing majorities of Americans feel about such strident opposition with a dismissive “Who cares?”

Rep. Jerry Nadler was kind enough to assuage religious objectors, though, by noting that “It’s very important to understand that people can believe what they want. They can go to what church they want, what synagogue, what they can believe what about temple, what mosque. Marriage or anything else they want. That’s a question of religious belief. We’re not dealing with religious belief in all these questions. We’re dealing with what the state or the federal government does. We have a separation of church and state in this country. So for government purposes, you can be married. The church may not recognize this. That’s their business. If you don’t want to recognize it from a religious point of view, it’s your business. No one is forcing anybody to get married. The point of the separation of church and state is that when we deal with public business and the consecration — not the consecration, but the celebration of marriage by the state, the recognition by the state of who’s married is not a religious question.”