Welcome (Back) To The Future! The Onion Reports From 2137 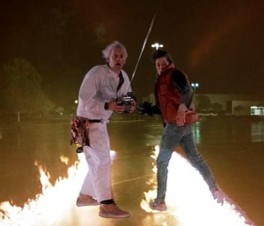 The Onion meanwhile, is taking its future reporting quite seriously. The Onion News Network has put together a 12-minute video titled “Future: News From the Year 2137.” Ha. The video will go on sale (take note paywall fans!) for $2 at Apple’s iTunes Store today. From the New York Times:

“In all honesty,” he said, “the medium has become a parody of itself. Talk about low-hanging fruit — or shooting fish in a barrel.”

Two former cable news hosts, Bobbie Battista of CNN and Suzanne Sena of Fox News, have freelanced as Onion anchors. (Real news “makes you cry,” Ms. Sena said. “Fake news makes you laugh so hard you cry.”) And the traffic goes both ways: Mr. Graham said one of the Onion network’s graphic designers had been hired away by Fox News.

I haven’t watched it yet, so I can’t report back on what the news looks like 137 years from now, or whether there are still roads. However, according to the NYT the video “purports to be a newscast recovered from a ruinous America in which states are named after corporations and citizens are outraged that a doomsday device failed to detonate as planned.” So basically just like regular cable news! In the meantime, here’s the original Back to the Future trailer, for free…You want a Pepsi, Pal, you’re gonna pay for it.