Howard Kurtz Blasts An Ant With A Nuclear Weapon
video

Howard Kurtz Blasts An Ant With A Nuclear Weapon 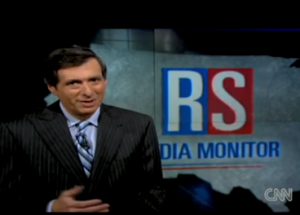 Last week in a private email exchange, Howard Kurtz wrote… just kidding. I have no reason to publish anything Kurtz has ever emailed me that wasn’t intended for the record. But if I write something critical of Reliable Sources, will he publish the last email I sent saying he should totally book me on his show?

That’s essentially what he did to Politico’s Patrick Gavin on Sunday, responding testily to Gavin’s breakdown on Politico of the most frequent guest on Reliable Sources this past decade. Kurtz defended himself against Gavin’s piece and then “outed” Gavin as having “repeatedly asked and cajoled” to come on the show. And, forgive me Howie, but it was weird.

Weirdness point #1: It wasn’t even that critical a piece.

Of course I read it immediately — I wanted to see if I made the cut! I’ve been regular-ish on Reliable Sources for the past few years, and have been a regular watcher for the past five, even through those excruciating exchanges between Kurtz and John King. And so I was not surprised to see names like Clarence Page and David Zurawik and Michelle Cottle and Gail Shister and Jill Zuckman and Eric Deggans and Jeff Jarvis and Rich Lowry, because I’ve seen them all plenty. That’s a list that Kurtz should be damned proud of — it’s a helluva lot more diverse than you see on any other cable news show. A diverse group makes for diverse opinions and a diverse show, which I’ve enjoyed on Reliable Sources plenty of times. 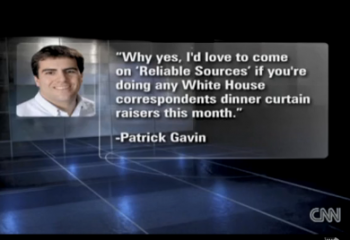 Gavin says he wishes Kurtz had more D.C.-based media critics and reporters on the show, citing a few overlooked media specialists “in his own backyard” that had not yet been invited on; Gavin does not cite himself either way, but does explicitly note his own personal bias in making a criticism based on including his own slice of the industry. Fair point? Definitely. You can always make a case for worthy, smart people to contribute, and when it seems like WaPo is getting favored by a CNN show because Kurtz happens to host it, it’s definitely fair to point that out. Gavin also quotes Karl Frisch saying he wishes there were more media critics on, and cites Jay Rosen and Glenn Greenwald as examples. I wish Gavin had pointed out that Jay Rosen had actually been on the show before. Fine. Finger-wag. Move on. [UPDATE: Finger-wag for me, as I originally stated that Rosen had been on the show 10 times, missing that not all the mentions had indicated he was actually on the show. Rosen emailed to correct me: “I think I was on 3 times max. Possibly four.” Rosen, however, said that he had not been on beyond that because “I asked not to be invited any more because I felt my performances sucked and I could not adjust to the rapid pace of Howard’s questioning. This is on the record.  Cheers.” Jay, I am sure you did not suck. I, however, do and apologize to readers for my error. Moving on.]

I’m not just talking “fair” like, threw in a “still” or an “even so,” I’m talking fair as in publishing a full four-paragraph response from Kurtz, in which he drops 17 other names of people he’s had on his show and responds in detail to Gavin’s concerns. About a third of the piece (at least) consists of Kurtz’s response. He then further published an update, an email from CNN Senior Executive Producer Tom Bettag, reproduced in full at the end of the column, which was as long or longer than Kurtz’s response. Sigh. Because I am a data-nerd, here are the breakdowns: (1) Gavin’s original article: 754 words; (2) Kurtz’s response: 254 words; (3) Bettag’s reponse: 287 words; (4) Kurtz + Bettag combined: 564 words; (5) Gavin’s article with the Bettag update: 1063 words. So – Kurtz’s response made up a third of Gavin’s original article, and Kurtz + Bettag make up half of the updated version. I’d say you do the math, except I just did it.

I would have thought it was weird to respond so fully to Gavin’s column anyway, given the response Kurtz and Bettag had given in print, and the reasonableness of it, and, going back to Point #1, given that the story actually showcased Reliable Sources as pretty diverse (never mind that it was data-based – as in, the Top 20 over a decade). But my mouth dropped open when I saw (actually read, in the HuffPo exclusive that CNN apparently sent out before the show) that Kurtz had “outed” Gavin for having “repeatedly asked and cajoled” to come on the show — then reading from a private email Gavin sent! 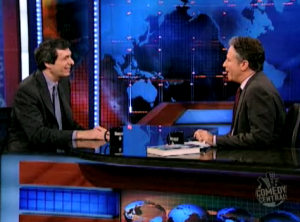 Two things here. First, my mind instantly flitted back to last week, and the protectiveness Kurtz seemed to have for the “unspoken agreement” of keeping “embarrassing” stuff off the record, vis a vis Michael Hastings and Lara Logan. There are differences here, sure — last week Kurtz was asking questions, not making statements (albeit leading ones that established the direction of the interview); also, we’ve seen no indication that Gavin and Kurtz spent a month together in the pressure-cooker crucible of Afghanistan. Still, Kurtz’s own column this week suggests that casual emails being fair game is at the very least an eyebrow raise. Even assuming that such an email was not explicitly off the record, its use should at least have a legitimate journalistic purpose if you’re going to use it — shouldn’t it? Unless of course we want our discourse to be “pathologically cautious and mind-numbingly banal.”

Second, I find it odd that a television host would try to shame someone for wanting to be on their show. “Oh please can I be on your awesome awesome show?” “Why thank you, my young friend with excellent taste, I will consider it.” Anyhow, it’s a moot point because there is no shame in being a media writer and wanting to participate in an influential dialogue about media. (Look at me doing it right now!) Why wouldn’t Gavin want to represent himself and his publication, Politico, on Kurtz’s show? Why shouldn’t he pitch himself? I see Gavin all the time on Morning Joe, and don’t think, “Oh God, did he ask to come on the program? How embarrassing.” Did Kurtz’s publisher pitch him to go on the Daily Show? I would think so, otherwise Kurtz would have had a crappy publisher.

In conclusion: Howie Kurtz, I hope this doesn’t mean you won’t have me on your show again, but I think you misfired big time on this one. It’s okay, you can make it up to the world by having me on to debate Kathleen Parker. Can’t wait!