Well, No One Likes Lena Dunham’s Latest Interview, So She’s Responded to the Criticism
LENA DUN-GOOFED

Well, No One Likes Lena Dunham’s Latest Interview, So She’s Responded to the Criticism 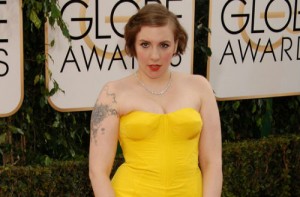 Today, her Lenny Letter publication put out a conversation between her and Amy Schumer. It showed her making assumptions about how much Odell Beckham, Jr. didn’t want to have sex with her at the Met Ball:

I was sitting next to Odell Beckham Jr., and it was so amazing because it was like he looked at me and he determined I was not the shape of a woman by his standards. He was like, “That’s a marshmallow. That’s a child. That’s a dog.” It wasn’t mean — he just seemed confused.

The vibe was very much like, “Do I want to fuck it? Is it wearing a … yep, it’s wearing a tuxedo. I’m going to go back to my cell phone.” It was like we were forced to be together, and he literally was scrolling Instagram rather than have to look at a woman in a bow tie. I was like, “This should be called the Metropolitan Museum of Getting Rejected by Athletes.”

Without speaking to him, that isn’t a very nice thing to do. The Internet agrees!

If you had “Odell Beckham Jr.” in the pool of what would finally turn everyone on Lena Dunham… well, congratulations, my friend.

And note that Lena Dunham also didn’t say that she tried to talk to Odell Beckham and that he didn’t talk back.

Moments ago, she tweeted this:

.@OBJ_3 is talented, stylish, seems super awesome and wasn’t into chatting with me at a fancy party.

My story about him was clearly (to me) about my own insecurities as an average-bodied woman at a table of supermodels & athletes.

Will it help the situation? So far, the responses to her tweets aren’t great, but maybe they will get better. Maybe they won’t. Maybe the Met Ball isn’t for Lena Dunham.