We’ve Solved All Other Problems, So WaPo Investigated Whether Dog Costumes Are Sexist
Opinion

We’ve Solved All Other Problems, So WaPo Investigated Whether Dog Costumes Are Sexist 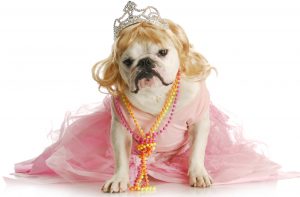 “Is your dog’s Halloween costume sexist?” asked The Washington Post Thursday, evidently testing out God’s promise to Noah to never again wipe out the human race.

After having solved every other issue of importance, business reporter Abha Bhattarai fretted that “the glass ceiling appears to be firmly in place at PetSmart, where career costumes labeled ‘male’ include firefighter and police officer, while female dogs can choose between a pink cowgirl costume and pink loofah.”

In an attempt to prove the Calvinist doctrine that humanity is totally depraved and worthy of eternal torment, Bhattarai investigated further:

On the site BaxterBoo.com, options for your female pooch include “sweet heart nurse” or French maid. “Any tidy girl dog will look adorable wearing this French Maid Dog Costume,” the site’s description reads. “Whether your pup is a clean freak or a messy mutt, she will enjoy playing ‘dress up’ in this fun costume.”

The choices for male dogs, meanwhile, include fireman, mob boss and doctor (suggested pairing: “match up with a girl friend with the Sweet Heart Nurse Dog Costume.”)

“It seems silly on the surface, but this is part of a larger message we’re sending, that there are certain jobs for men, and certain jobs for women,” one feminist podcaster told her. “The career options for women — and dogs — need to go beyond pink loofahs and pink cowgirls.” WaPo fact-checkers gave the last sentence Four Pinocchios, finding that dogs actually need zero career options, and that “loofah” is not a career.

While the Pulitzer committee has not yet weighed in, Vegas bookmakers have declared the article the clear frontrunner for journalism’s highest honor. But the WaPo piece is actually being considered under the commentary section, in recognition of its subtle and satirical endorsement of postmodern nihilism, it’s reflection on the meaninglessness of existence, and its enthusiastic embrace of the eventual heat death of the universe.

Representatives for PetSmart did not respond to The Washington Post‘s requests for comment, having presumably gone to the roof of their corporate headquarters and stepped off the ledge and into the abyss.

[Image via Shutterstock/fifth circle of Hell]