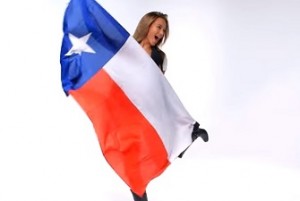 This is what happens when you do all your thinking with your muzzle.

Sports Illustrated swimsuit model and Texas native Hannah Ferguson has become an instant celebrity on conservative, and hailed on Fox News as some sort of Second Amendment hero because she like guns. Here’s a little taste of how Breitbart.com’s “Second Amendment Columnist” reported on Hannah’s recent remarks:

On March 2, Sports Illustrated swimsuit model Hannah Ferguson defended gun ownership, describing how she learned to shoot and suggesting people who fear firearm ownership do so from a lack of “gun knowledge.”

…Ferguson observed, “I feel like it’s good to have gun knowledge. I feel like a lot of people are scared of guns,” she explained. “They think they’re bad and they really don’t know anything about it.”

She addressed the question of whether guns should somehow be confiscated following a high-profile crime or shooting, Ferguson pointed out that criminals will always have guns; taking guns away will simply disarm law-abiding citizens who only use them defensively to being with. She said, “I don’t think they should be taken away from people because any bad person who wants to find a gun is going to find a way to get it and then what? We don’t have a way to protect ourselves? I feel like people should get more knowledge and understanding.”

I guess we hear want we want to hear, especially when we’re looking for an excuse to post pictures of a swimsuit model on a political blog, but the right-wingers who are just happy that a girl might be talking to them are leaving out a key part of what Ferguson actually said. To the extent that supermodels should be setting gun policy, liberals could do much worse than Hannah Ferguson, as she told “Fox 411”:

The Texan born beauty believes there should be some kind of gun control, “maybe people should be tested or looked into more to see if they’re mentally unstable” before they’re allowed to purchase a firearm.

That proposal, to test gun purchasers before they’re allowed to buy a gun, actually goes a few miles further than anything President Obama has proposed, or even dared to dream of. Hannah Ferguson and her gun policies are something every liberal can get behind.