What Do October 21, 2045 Politics Look Like? A Back To The Future Examination 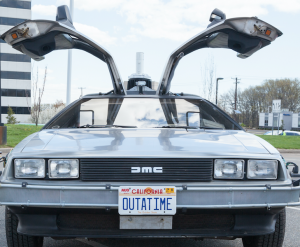 This week may belong to the venerable Star Wars series and the excitement surrounding Monday’s release of the final trailer for the new installment. But, it’s a different historic film franchise that is stealing the social media spotlight today. “Back To The Future Day” is honoring the future date that Marty McFly and Doc Brown visited in the 1989 sequel: Wednesday, October 21, 2015.

The premise of the sequel got us thinking… what do the potential absurdities look like if we jump ahead 30 years into the future? Just take a look at the differences between the film’s version of 2015 and ours. McFly and Doc experienced some outlandish things like hover boards and video glasses; but isn’t our reality — with a popular Presidential candidate like Ben Carson — just as nuts? We have a Democratic-Socialist mere percentage points from the lead on one side, and three candidates who have never served public office surging on the other.

McFly’s late 80’s Donald Trump was owner of the Taj Mahal Casino; our Donald Trump is looking increasingly like he may earn the nickname “45”. Though Zemeckis predicted that the Chicago Cubs would win the World Series this year, just as unbelievably, the New York Mets of all teams look as likely as any. Maybe fact is stranger than even the wacky fiction from the mind of Robert Zemeckis.

Let’s take a quick spin in the political DeLorean and look at the same time jump into the future: Saturday, October 21, 2045.

Assume Donald Trump does, somehow, without any hope of common sense, win this whole thing. In thirty years, I expect he will be considered a Ronald Reagan-like figure. After all, the comparisons really are there if you think long enough. Both Presidents Reagan and Trump were considered “joke” candidates out of the gate, chastised for their entertainment careers and viewed an “unfit” for the Presidency. President Trump will be a demigod of conservative dogma, and statues will be built in honor of “The Very Humane Deportation of 2017“. The GOP nomination process of 2043 will have had one of its main debates in the Donald Trump Presidential Library in Manhattan. On the backdrop of Trump’s fleet of Air Force Ones (yes, he’ll own a fleet of them), each GOP candidate will invoke Trump’s name as a mythological titan of industry and executive power.

How about thirty years into the future after the Presidency of Bernie Sanders? For one, all of the Wall Street banks get broken up so quickly that Teddy Roosevelt’s efforts look like child’s play. In fact, the financial institutions like JP Morgan Chase, Wells Fargo, and Bank of America go the route of the Green Bay Packers and fall squarely into the hands of the people. The minimum wage sky rockets to $175 an hour; CEOs earn $176. Sanders gets sworn in on a copy of Thomas Piketty’s Capital in the Twenty-First Century; photos of Karl Marx adorn every American classroom since the end of the Sanders reign. If you build a business from the ground up, you become legally required to pay 99% in taxes toward “the common good”. President Sanders, 104 years old, still owns one pair of clean underwear that he dries on the radiator.

Three decades or so after the Presidency of Lawrence Lessig, the world of the Beltway is utterly unrecognizable. After passing the Citizen Equality Act of 2017, the first referendum President ensures that every single eligible American citizen votes, and the 2044 election has a 100% voter turnout. Election day is of course a national holiday — deemed “Lessig Day”, for sure — and parties line the American streets after ballots are filled. “Gerrymandering” would simply be a Jeopardy answer in the category ‘Antiquated Practices of US Politics’; all campaigns are exclusively funded by the public. President Lessig is also remembered for the shortest term in Presidential history, withdrawing from the role the day after passing his signature Act, eclipsing even William Henry Harrison’s Presidency by three days.

So there you have it: a brief look at how politics may be changed thirty years from now, inspired by “Back To The Future Day”. Great Scott! What a different world we might live in indeed.