Who Is Ellie Light? Simliar Letter Published In Newspapers Around U.S.
video

Who Is Ellie Light? Simliar Letter Published In Newspapers Around U.S. 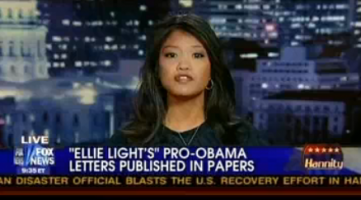 In a story picking up steam in the conservative blogosphere — even scoring a segment on Sean Hannity‘s show last night (video below) — a frequent Letter to the Editor writer Ellie Light has had submissions appear in numerous newspapers around the country in support of President Barack Obama, each time claiming to be a local of that area. First reported by the Cleveland Plain Dealer, Light’s editorials have appeared in the San Francisco Examiner, Philadelphia Daily News and papers from Ohio to Maine, Iowa and California.

Now, many are wondering what the story is with this prolific letter writer. Hot Air wonders if someone is “doing a little Astroturfing for Obama,” and counts the Light letters in nearly 50 newspapers in 23 different states. Newsbusters used the opportunity to slight newspapers: “It should warm your heart to know that mainstream newspaper editors are so out-of-touch, something can appear in the blogosphere and all of their competitors for three weeks without them even noticing.”

Indeed, if it’s a scam, it is an embarrassment for a host of editors from small newspapers. But there are just as many questions for whatever person or group is behind Ellie Light. Do they really think a Letters to the Editor page still matters in a propaganda campaign? It’s almost quaint.

In the Daily News, Light writes:

Today, the president is being attacked as if he’d promised that our problems would wash off in the morning. He never did. It’s time for Americans to realize that governing is hard work, and that a president can’t just wave a magic wand and fix everything.

Not an entirely different message than can be found in more widely read forums across the internet. So, why plant them?

One Plain Dealer reporter has followed the story deeper than most, emailing with Light to affirm her identity. She was eventually told by Light, “I found that editors were eager to present a point of view on the topic that wasn’t so overheated and angry. Indeed, I think the viewpoint that my letter expressed was less important to the editors than the even and non-emotional tone.” No answers there.

But this morning, a woman claiming to be Ellie Light called the radio show of Philadelphia conservative Michael Smerconish. “I’m only me,” she said, according to Politico. “I need to own up – I did misrepresent my home town in some places,” Light continued. “My letter was pretty darn good. It took a long time to write. I took more interest in honing it than most people take today.”

Salon blogger Glenn Greenwald, meanwhile — far from a conservative blogger himself — wrote one possible explanation, if light is indeed being disingenuous. Noted by Hot Air, the Greenwald post describes a paper written by “one of Obama’s closest confidants,” Cass Sunstein. Greenwald summarizes the contents of the Sunstein paper thusly:

Keep in mind the above Greenwald piece was written before the Ellie Light situation specifically picked up any notice. A scary proposition and the rest of Greenwald’s take is well worth a read.

Hannity had Michelle Malkin — the Hot Air proprietor — on to discuss the matter last night, where she blamed the Obama administration for “spreading a bogus sense of grassroots support.” Hannity asked if Light might be connected to the Democratic establishment, while Malkin turned the blame mostly to the “gatekeepers” allowing the “astroturfing.” See the whole clip below, and check back for updates on this story as it develops: