Why Did a Six-Year-Old Boy Get Suspended for Sexual Harassment?
video

Why Did a Six-Year-Old Boy Get Suspended for Sexual Harassment? 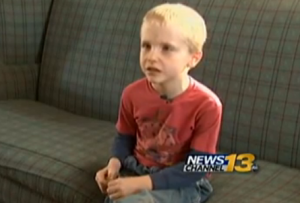 Childhood crushes are sweet and innocent, especially when the children in question are six years ago. But one Colorado school has a slightly different take on what to call such crushes, and one student was suspended on charges of sexual harassment for giving the girl he likes a kiss on her hand. A kiss that the girl in question didn’t object to.

Hunter Yelton‘s mom explained that the two of them consider themselves “boyfriend and girlfriend,” and they only got in trouble because their classmates tattled to their music teacher.

“That was the day I had the meeting with the principal, where she first said ‘sexual harassment’. This is taking it to an extreme that doesn’t need to be met with a six year old. Now my son is asking questions… what is sex mommy? That should not ever be said, sex. Not in a sentence with a six year old,” said Hunters’ mom, Jennifer Saunders.

For his part, Yelton told KRDO that he “did something wrong and I feel sorry,” but his mother’s fighting to get the “sexual harassment” mark off his permanent record, especially considering there was no actual harassment that took place.

So in case you’re keeping track, that’s one student suspended from school for pretending to shoot bows with his pencil, and another suspended for sexual harassment because he kissed a girl’s hand. Any other schools have weird reasons to suspend children they’d like to share with us?

Watch KRDO’s report on the incident below: