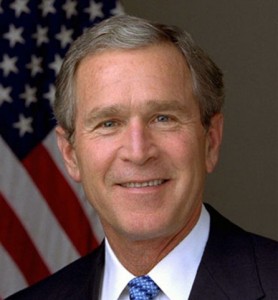 Suck it up, haters. I love George W. Bush and I’m not afraid to admit it, nor am I hesitant to explain why. This piece is by no means an attempt to convince leftist adherents to abandon their false perceptions of America’s 43rd president (that’s a hapless task and I’m well beyond believing in my power to persuade people who base their stances on vapidity). Rather, I am penning this piece because I truly believe that a great disservice has been done to a man who gave his all to protect his nation – a man who, despite what critics say, was and is highly intelligent, capable and intrinsically-tuned in to the nation’s needs.

Unfortunately, there is a leftist mindset that contends that Bush is an unintelligent buffoon who meandered his way into the White House. Not only is this incredibly simplistic, but it flies in the face of rational thought. One cannot become president – I repeat – one cannot assume the highest post in the nation — if he or she is certifiably idiotic. It takes intelligence, charisma and a sharp mind to survive reporters, primaries, debates and other electoral mayhem. Winning over the American public is a wretchedly difficult task. George W. Bush accomplished all of this, and more – twice (or for those who still believe that Bush “stole” the 2000 election we can contend that he accomplished all of this at least once).

No one is perfect; presidents aren’t immune to the fallible nature of the human spirit. Surely, President Bush made mistakes along the way. The mismanagement of the War on Terror. Increased government spending. The list goes on. There are certainly fair criticisms, as there would be for any leader. That in mind, many liberals fail to afford Bush the grace and gratitude he’s due. This, in itself, is disturbing, disrespectful and vehemently vicious all wrapped into a detestable package of partisan rot. The man kept America safe for the majority of his tenure. Shouldn’t that count for something?

While his national security record stands for itself (and I’ll touch upon it later), perhaps the most attractive attribute our former president demonstrated was his stellar character. Now, before those on the left cardiac arrest at the audacity of my compliment, consider, as an anecdotal, the admirable decision Bush made in the wake of President Obama’s historic victory. For the past 19 months, instead of responding to Obama and the Democrats’ childish attacks and incessant blame for everything from financial meltdowns to the very destruction of the American ideal, Bush has remained quiet, composed and observant. Rather that criticize, he has allowed Obama to govern as he see fits. Even the most ardent Bush-basher must admire the sheer class and composure that governed our former president’s silence.

Sharply contrasting the unity Bush fostered in the days following 9/11 and the classy sentiment through which he approached his successor’s presidency, Obama has exploited every opportunity to drive a partisan wedge into the heart of American electorate; he has continually blamed Bush and the Republicans for our nation’s ills. Yet, everyone with one cent’s worth of a brain knows that both parties have contributed to America’s dramatic and grandiose sociopolitical ills. Obama’s railing on against the Republicans has been reminiscent of a campaign stump speech stuck on repeat. It’s unneeded and, frankly, it’s un-presidential.

At the end of the day, George W. Bush possesses a level of class that is superior to both Clinton and Obama. Anyone who argues the contrary needs to remove the partisan blinders and learn some fair assessment skills. I’m not asking that you like the guy, but I am asking for you to give credit where it’s due.

After Bush’s stellar character comes his conviction. His belief in freedom colored his presidency and was often the focal point of his most contentious policy decisions. It was his conviction that led America (back) to the Middle East following 9/11. His tireless goal to democratize theocratic and radical regimes was rooted in a thirst for improved human rights and lasting peace and prosperity in a region that has been strewn with violence since the beginning of time. Feel free to agree or disagree with his decision to invade, then stay the course, but one fact is undeniable: George W. Bush protected domestic interests and American lives.

He refused to give up on the notion that America could and inevitably would make a difference in the Middle East. At worst, he was determined to finish the job he set out to complete in the first place. In the end, he kept his promise to Iraq, which is surely respectable. He’s a man of his word (another reason I admire him). Oh, and for my liberal detractors: Bush never lied about WMD; Saddam Hussein did.

Here in America, it was Bush’s conviction and determination that also made it possible for citizens to carry about their daily business without suffering any post-9/11 attacks at the hands of terrorist nutjobs. And for those Democrats and liberal elite who accused Bush and the Republicans of overstating the terror threat for political gain, I point you to the countless domestic plots we’ve seen since Bush left office. Terror was and continues to be a real threat. President Bush understood this and worked to his utmost to protect the public, while continuously refining the systems through which he accomplished the task.

Following Bush’s character, conviction and determination comes his leadership style. While many on the left contend that Bush was a puppet whose strings were controlled by Cheney and Co., this is figment comprised of “sheet inaccuracy.” Bush was decisive and at the helm; his decisions were controversial. When Bush left office, his approval rating was abysmal. It was at that time that the American public had become weary. Despite a lack of support from the American people on the War on Terror, Iraq and other policy decisions, the president pushed forward in light of his principles and ideals.

While we can agree that there are certainly downsides to this sort of leadership style, there’s also something admirable about it. When we elect officials, we place our utmost trust in them. A president must make tough decisions for the welfare and benefit of the people whom he represents. By these same standards, I must give President Obama credit for his tireless work. While I disagreed with the stimulus and the health care overhaul (as did the majority of the American public), I can respect the determination and goodwill through which he pushed those measures. Obama believed fully in both causes, as Bush did in Operation Iraqi Freedom and the War on Terror. In this regard, the presidents certainly share similarities in their leadership styles.

In the end, Bush was realistic in recognizing and reiterating the notion that radical Islamic fundamentalists hate America because of what she stands for. And let’s not forget President’s Bush’s historic assistance in fighting global HIV/AIDS, his accomplishments in the chronic homelessness arena and his attempt to reform Social Security. These are a few specific accomplishments our former president deserves accolades for. But most of all, President Bush has always had a way with the American people. He’s upfront, transparent and open. His recent media interviews reflect these sentiments and set him apart from other politicians. While I disagreed with some of his presidential actions and inactions, I can’t help but love the guy. Plus, I’ve yet to hear compelling reasons why I shouldn’t.

Billy Hallowell is a journalist and commentator who focus on media, politics and society. His writings can be found at www.billyhallowell.com and on Twitter.