Why Won’t President Obama Support Our Right To ‘Choom’ A Doobie Like He Did?

Why Won’t President Obama Support Our Right To ‘Choom’ A Doobie Like He Did? 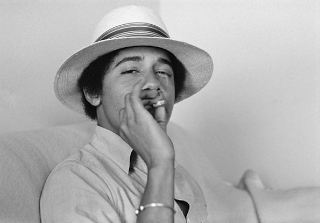 Washington Post editor David Maraniss‘ forthcoming book Barack Obama: The Story at points describes the president’s marijuana hijinks during his high-school and Occidental College days. Book excerpts posted online reveal that young Barack Obama frequently smoked marijuana, and he and his “choom gang” developed clever strategies for how to better maximize the impact of the “sticky-green.”

In light of these stories, shouldn’t President Obama offer every American the right to “choom” (verb, to smoke marijuana), instead of continuing to lock up marijuana users for hitting three-foot bongs like he did?

Barry Obama was known for starting a few pot-smoking trends. The first was called “TA,” short for “total absorption.” […] Along with TA, Barry popularized the concept of “roof hits”: when they were chooming in the car all the windows had to be rolled up so no smoke blew out and went to waste; when the pot was gone, they tilted their heads back and sucked in the last bit of smoke from the ceiling.

Young Obama apparently was also a bit of a bogart when it came to communal marijuana smoking:

Barry also had a knack for interceptions. When a joint was making the rounds, he often elbowed his way in, out of turn, shouted “Intercepted!,” and took an extra hit. No one seemed to mind.

On its own, stories like these about a young adult are actually kind of funny, even humanizing — like something straight out of a stoner comedy. But when you realize it’s about President Obama, it becomes a little less humurous.

Less humorous because President Obama has repeatedly laughed off and dismissed serious discussion about drug policy, like in that 2009 virtual town hall where the president mocked online voters for picking a question about marijuana legalization.

Less humorous because the president shuts down medical marijuana dispensaries with a frequency that would have made Richard Nixon stand up and cheer. He presides over a DOJ, IRS, and DEA that have threatened, audited, and shut down legal pot sellers in California, Colorado, Montana, and Washington. All this despite once promising to respect state laws regarding medical marijuana.

It’s high time that Obama confronts his past marijuana use and extends the right to get high as a kite to all other Americans. I’m no marijuana smoker, but I’d love to have the right to choose to be one.