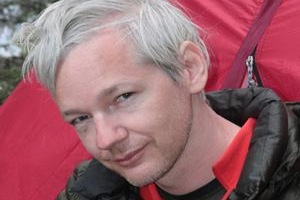 For an organization that advertises itself as a defender and disciple of the truth, Wikileaks sure has a hard time keeping the truth about itself straight. Little more than an hour after AP published an interview with alleged Wikileaks spokesman “Daniel Schmitt,” the organization’s Twitter feed, suspected to be run by editor-in-chief Julian Assange, condemned it as “untrue and misleading” and emphasized that it was “not endorsed.”

Schmitt, who posed for a picture despite giving a pseudonym, told the AP that the organization is hopeful Americans will become more politically active against the war in Afghanistan due to the documents they leaked. Despite many accusations that Wikileaks has put countless Afghan informants and American soldiers in danger needlessly, Schmitt told AP, “Knowledge about ongoing issues like the war in Afghanistan is the only way to help create something like safety. That said, he toed the same line as Assange and argued that Wikileaks editors “have tried our best and we are still working on minimizing the harm that has been caused.”

None of that deviates significantly from anything said on Assange’s big media tour these past two weeks. So what exactly is Wikileaks complaining about? Perhaps they are uncomfortable with the fact that Schmitt outed the size of the full-time Wikileaks team– Schmitt, Assange, and three more people. Or perhaps it is the fact that AP’s headline states dramatically “Wikileaks to Publish New Documents” which, though it seems to imply that there are new, threatening documents to American national security related to the Afghanistan leak, comes from the following quote from Schmitt: “I can assure you that we will keep publishing documents — that’s what we do.” In other words, that means the headline is about as shocking as “Glenn Beck to Film More Programs for Fox News” or “Ralph Nader to Run for President.” The new documents could be anything from significant national security leaks to candid photos of the scribbles on Sarah Palin‘s hand.

That said, it does follow a trend with Wikileaks and Assange (at some point it becomes difficult to divorce the two entities) of condemning every single news report released by a medium that isn’t their website. Michael Moynihan at Reason gives a good summary:

After Keller’s criticism, Assange moaned that The New York Times, a newspaper with an impressive and brave staff of war correspondents, wouldn’t link to the Wikileaks website and denounced the paper’s coverage of the leak as “unprofessional.” The Times of London, whose staff reported that Wikileaks’ document dump exposed the names of confidential Afghan informants, was “disingenuous” in their reporting, the paper guilty of “media manipulation.” The rest of the media, many of whom are currently translating the leaked material into news stories, is doing “such a bad job” compared to Wikileaks. Those who criticize Wikileaks’ methodology—and they span the ideological spectrum—”feel jealous, or they just don’t understand the issue,” Assange says.

And that’s not to mention the fact that Assange is actually the resident comments curmudgeon (there’s an internet term for that, but I won’t use it) on Mother Jones and regularly calls them things like agents of “right-wing reality distortion.”

When taken altogether, a clear Palinesque narrative against the Lamestream Media™ arises which is voraciously fed by the dual Wikileaks/Assange identity. Even if there initially was a kernel of truth in their accusations of distortion against an interview that read more or less objectively, their attitude and reputation make it increasingly difficult to separate the wheat from the chaff of their whining. If the ultimate goal of Wikileaks’ foray into American foreign policy really is to get the American people on their side, it would benefit them to at least try to be cordial with the media through which the American people interpret them.

UPDATE: Wikileaks recently tweeted that the AP is working on a clarification of the piece. The piece now says it was updated “ten minutes ago” (at 3:52 PM), but the author does not indicate what the updates are. This paragraph, however, seems new:

“For this reason, we conveyed a request to the White House prior to the publication, asking that the International Security Assistance Force provide us with reviewers,” Schmitt said. “That request remains open. However, the Pentagon has stated that it is not interested in ‘harm minimization’ and has not contacted us, directly, or indirectly to discuss this offer.”

[Photo of Assange via]