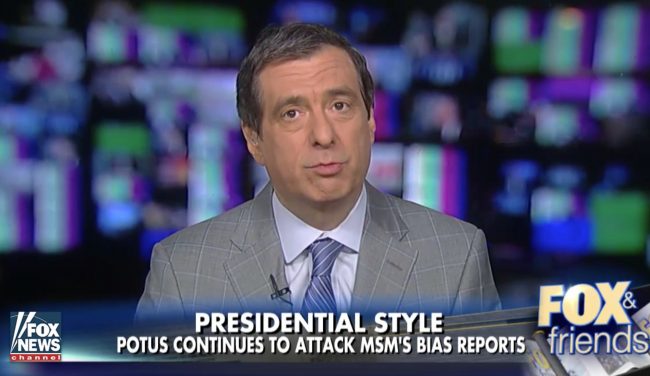 Howie Kurtz, the host of Media Buzz on Fox News, takes on the top stories at the intersection of politics and news each weekend for his long-running show. But while the Fox News stalwart understandably needs to play to his conservative base of pro-Trump viewers, he has virtually eschewed any mention of the blatant falsehoods that the new administration has pelted the media with in the opening hours of this Presidency.

Instead, newly-installed press secretary Sean Spicer was depicted at times as a figure of moral strength on Media Buzz Sunday, with the panel conversations circling around the dynamic between the administration and the press. Furthermore, Kurtz’s column Monday morning additionally made no reference to the trickle of tall tales, opting instead to highlight anti-Trump criticisms by random people on social media.

If you’ve had a hard time keeping up with the spattering of distortions this weekend, let’s review a bit. On his first full day as press secretary, Spicer entered the James Brady Press Briefing Room and rattled off a list of absurd claims that seemed like they were angrily scribbled down by President Trump on a napkin minutes before. Spicer excoriated the media, reading off these verifiably false statements in the process:

“Photographs of the inaugural proceedings were intentionally framed in a way, in one particular tweet, to minimize the enormous support that had gathered on the National Mall.”

“This was the first time in our nation’s history that floor coverings had been used to protect the grass on the mall. That had the effect of highlighting any areas in which people were not standing.”

“This is also the first time that fencing and magnetometers went as far back on the Mall, preventing hundreds of thousands of people from being able to access the Mall as quickly as they had in inaugurations past.”

“We know that 420,000 people used the D.C. public transit yesterday, which actually compares to 317,000 who used it for President Obama’s last inaugural.”

“This was the largest audience to witness an inauguration, period. Both in person and around the globe.”

Then, remarkably, Kellyanne Conway gave life to the newest phrase that earned its well-deserved mockery of viral glory: “alternative facts,” as in a completely separate set of facts that somehow exist in Trump La La Land but can not be found anywhere else.

Kurtz paid no mind to this blatant abuse of the press secretary’s pulpit, saying instead in his opening Sunday, “Sean Spicer denounced the media for their coverage of this inaugural weekend, especially the debate over crowd size.” He later added that Spicer simply, “unloaded on the press.”

And in his Monday morning column for Foxnews.com, Kurtz instead focused on the general public’s reaction to President Trump’s inaugural address. “I’m focusing on more or less ordinary folks, people posting on Facebook, which used to be a calmer alternative to the toxic stew that is Twitter,” he writes.

Kurtz even offered up his own opinion on the topic of anti-Trump activism, writing, “It would be nice even if those who oppose him personally and politically wished him well, for the good of the country. But online, at least, that’s not the world we live in.”

Make no mistake; all administrations lie. Did Josh Earnest and Jay Carney ever mislead while representing President Barack Obama? Almost certainly so; hell, even President Obama knew how to obfuscate his way out of tough answers as well as anyone. But the Trump brand of dealing with the media has been — since day one — to overwhelm with discernibly false statements and quadruple down on all ridiculous assertions when pressed with the cold, hard truth. Spicer himself even told a University of Chicago crowd earlier this month, “I may tell a reporter I can’t comment on something, or I’m not able to discuss it, but I never lied. And I don’t intend [to].” He continued, “If you lose the respect and trust of the press corps, you’ve got nothing.”

And yet, the man marched out this weekend and fired off fallacy after fallacy, presumably because his short-tempered boss told him to do so. It’s remarkable that even though Howie Kurtz is clearly avoiding this fact to placate his #MAGA-hat wearing crowd, there is no admitting anywhere that Spicer began his new gig by making stuff up. It would be nice if those who like Trump could hold the administration more accountable for blatantly lying.

But at Media Buzz, at least, that’s not the world we live in.

—
J.D. Durkin (@jivedurkey) is an editorial producer and columnist at Mediaite.
[image via screengrab]