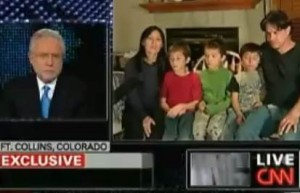 One of the most brutal take-downs of Sarah Palin during last year’s campaign came at the hands of CNN’s Jack Cafferty, who simply played a clip of one of her Couric interviews and angrily referred to it as “one of the most pathetic pieces of tape” he’d ever seen.

Sitting next to him was Wolf Blitzer, he of Gulf War fame, now transmogrified into tepid network nameplate. Blitzer, playing the network’s favorite game (“Let’s Appear Neutral!”) suggested that she had been “cramming a lot of information” – but he wasn’t able to finish before Cafferty jumped down his throat, insisting Blitzer “not make excuses” for Palin. It was an ugly moment, and likely an embarrassing one for Blitzer.

Wolf Blitzer was handed, on a mylar platter, the scoop of the day – Balloon Boy, Falcon Heene, responding to the question of why he hid in the attic so long with a tenuous, “You guys said that we did this for the show.” His father reacted like the jig was up (“Man…”); his mother, holding out hope, pushed back. That happened shortly before 9:18 p.m. Eastern, which is when I sent a tweet saying, “Um, I think the Balloon Boy just said he didn’t come out of hiding because, ‘we did it for a show.’ Wolf, want to check on that?”

Wolf didn’t want to check on that. Another half hour of interview proceeded, with no mention of Falcon’s statement. The parents and their squirming sons breezed through softballs about how they felt, the nature of the balloon, etc. All of those who felt something was odd about the whole situation, myself included, watched a key point fade away.

This was the story of the day! And it featured a family who had already been on a reality show. A father eager enough to be on CNN that he filed repeated “iReports”, looking at various weather phenomenon, which became a staple of the filler period between the landing of the aircraft and the location of the child. But no follow up from Wolf.

Until the last question of the segment. Coming back from commercial, Blitzer baited his hook:

BLITZER: Richard Heene, the father of little Falcon — Richard, earlier in the show I asked you to relay the question to Falcon. He was hiding in the garage for four hours. I asked you to ask him why didn’t he come out after he heard you and his mom and everybody else screaming for Falcon. And you said to him, “Falcon, why didn’t you come out?”
And Falcon said, hmmm, you guys said that we did this for the show. And you said, hmmmm. What did he mean, we did this for the show?

R. HEENE: I have no idea. I think he was talking about the media.
They’ve been asking a lot of questions. So somebody asked him that question earlier.

BLITZER: Why he said — he said we did this for the show in explaining why he didn’t come out of the attic.

R. HEENE: Yes. Let me interrupt this real quick. I think I can see the direction you guys are hedging on this. Because earlier you had asked the police officers the question. The media out front, we weren’t even going to do this view. And I’m kind of appalled, after all of the feelings that I went through, up and down, that you guys are trying to suggest something else.

OK? I’m really appalled, because they said out in front that this would be the end, and I wouldn’t have to be bothered for the rest of the week with any shows or anything. So we said OK, fine, we’ll do this.
So I’m kind of appalled that you guy would say something like that. You know?

Notice that Falcon, who had no earpiece, wasn’t asked Blitzer’s question. Notice that the father tried to change what he was supposed to ask. Notice how inordinately defensive his response was. This is the get. This is the moment journalists dream about. Blitzer should have been salivating.

The fish wriggles free. If it hadn’t been for Anderson Cooper picking up the ball during 360, CNN would have completely abandoned their own scoop.

Wolf, I’d check dark alleys as you’re headed to your car today. I have a feeling Jack Cafferty is lurking in the shadows with a cudgel.