President-elect Donald Trump‘s tweets about John Lewis and his district led to a pretty strong front page from the Atlanta Journal-Constitution today: 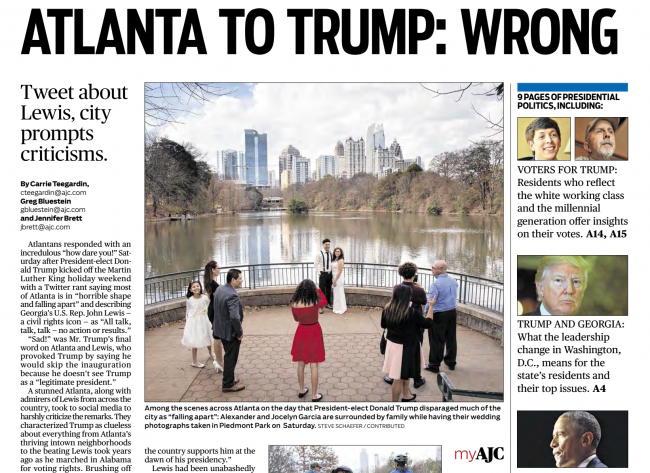 To recap, after Lewis said he doesn’t think Trump is a legitimate president, Trump not only shot back by criticizing Lewis, but he also claimed that his district is “crime-infested”:

Congressman John Lewis should spend more time on fixing and helping his district, which is in horrible shape and falling apart (not to……

mention crime infested) rather than falsely complaining about the election results. All talk, talk, talk – no action or results. Sad!

The lede for that front page story starts out by saying “Atlantans responded with an incredulous ‘how dare you!'” to Trump.

And that was just the tip of the iceberg:

A stunned Atlanta, along with admirers of John Lewis from across the country, took to social media to harshly criticize the remarks. They characterized Trump as clueless about everything from Atlanta’s thriving intown neighborhoods to the beating Lewis took years ago as he marched in Alabama for voting rights. Brushing off the accomplishments of Lewis, who is widely revered by many Americans well beyond Georgia, went too far, they said…

The congressional district that Lewis represents includes many of Atlanta’s crown jewels as well as pockets of poverty. It runs from Buckhead to Decatur, over to Atlanta’s Westside and reaches south to include Hartsfield-Jackson International Airport and parts of Clayton County. Georgia went for Trump, but the 5th Congressional District and the city of Atlanta as a whole remain solidly Democratic and supported Hillary Clinton over Trump in November.

The district that Trump described as in “horrible shape” includes Emory University and Morehouse College, as well as Spelman College and Georgia Tech. The Coca-Cola headquarters is just one of that district’s many, high-profile corporate residents. Lewis represents Midtown’s shiny residential high-rises and the pricey Intown neighborhoods filled with renovated homes, the Beltline and Ponce City Market.

Atlanta Mayor Kasim Reed also had a few things to say to Trump:

is why far less than half the country supports him at the dawn of his presidency. #HeStoodUpForUs #LetsStandForHim