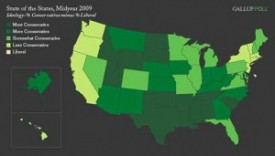 In a Newsbusters piece just picked up by the Wall Street Journal titled “Shhh! Gallup Reports That Conservatives Outnumber Libs in All 50 States; Media Plays Dumb,” Tom Blumer fumes at the wicked mainstream media for not paying enough attention to a recent Gallup poll that purportedly says that conservatives outnumber liberals in all 50 states: “you know this is important polling news, because the establishment media is pretending it doesn’t exist.” Did the media really drop the ball on a story this big?

Upon closer reflection, this is a misleading claim at best, and bogus at worst.

Quoth Blumer: “The news isn’t just that self-identified conservatives outnumber self-identified liberals nationwide. That’s old hat. The big news from Gallup is that conservatives outnumber liberals in every state in the union, including supposedly uberliberal Vermont and Massachusetts.” That “self-identified,” which Blumer conveniently drops throughout the piece, is key. The poll doesn’t actually say, as Blumer does, that “conservatism prevails” in every state; what it says is that the word ‘conservative’ is a more popular identifier than the word ‘liberal.’

As Media Matters’ Jamison Foser points out, these labels are “imprecise and meaningless” to many Americans, and shouldn’t be relied on to measure people’s actual ideology. Even self-avowed political liberals acknowledge that the word ‘liberal’ has become something of a dirty word in the U.S. “Conservative,” on the other hand, sounds like a good way to dress and invest, and except on some message boards it’s not really a bad word in itself. But there’s a big gap between what people call themselves and what they believe in.

The Gallup pollsters recognized this when they wrote that “The strength of ‘conservative’ over ‘liberal’ in the realm of political labels is vividly apparent” (emphasis added). Blumer — and whatever WSJ editor greenlit this piece — willfully steamrolled over the distinction to reach an astounding conclusion that, even at a glance, makes no sense.