You Know Who Else Didn’t Endorse the Republican Nominee? Ronald Reagan.
Opinion
VIDEO

You Know Who Else Didn’t Endorse the Republican Nominee? Ronald Reagan. 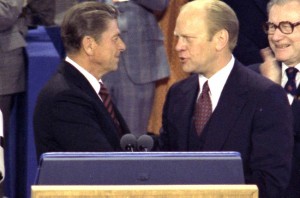 Ted Cruz is not the first Republican presidential candidate to give a primetime RNC address that did not endorse the winning candidate; no less than Republican icon Ronald Reagan did the same thing in 1976.

Let me preface this piece by saying that in general I’m not a fan of the There Is Only One Republican Party And Reagan Is Its Prophet school of conservatism. For one thing, it’s not healthy for a party to live three decades in the past. For another, it gives an easy layup to Democrats when Reagan happened to disagree with the current Republican consensus. Reagan was a political genius, the architect of modern conservatism… and fallible.

But I’ve noticed several Trump supporters are accusing Cruz of betraying Reagan’s legacy by not endorsing Trump. “I’m old enough to remember the events in 1964 and the events of 1976, and I think that he opted for ’64 instead of ’76,” Trump campaign chairman Sam Clovis said on MSNBC Thursday. “And I think what a lot of people don’t realize, Ronald Reagan gave one of the most gracious speeches ever in a political environment where he came up and endorsed Gerald Ford.”

Former Congressman Joe “Look at Me” Walsh made the same argument on Twitter.

I don’t doubt that Clovis was in the thick of the contentious 1976 convention, but his memory is somewhat flawed. Going back and reading then-Governor Reagan’s speech, he did nothing of the sort.

I encourage you to read the entire thing (it’s very short), but here’s the abridged version: Reagan began his speech by addressing Ford, but only for being kind towards him and his wife. “Mr. President, before you arrived tonight, these wonderful people here when we came in gave Nancy and myself a welcome. That, plus this, and plus your kindness and generosity in honoring us by bringing us down here will give us a memory that will live in our hearts forever,” he said.

From there, he pivoted away from Ford entirely and instead praised the new Republican platform. For the vast majority of the remaining speech, he went on at length about said platform, the Democrats’ disregard for freedom, the threat of nuclear war, shared his own personal anecdotes– and ignored the sitting Republican president standing ten feet away from him. In essence, Reagan gave a Reagan campaign speech on the stage of a Ford convention.

It was only in the final seconds of his speech that he addressed the newly-minted Republican nominee again: “We must go forth from here united, determined that what a great general said a few years ago is true: There is no substitute for victory, Mr. President,” Reagan said.

I can only assume that last part is what Trump backers are calling an “endorsement” of Ford, rather than the traditional and overt “I endorse X.” But if broad calls for unity and victory are now counted as endorsements, than Cruz issued an endorsement yesterday:

We deserve leaders who stand for principle, who unite us all behind shared values, who cast aside anger for love. That is the standard we should expect from everybody. And, to those listening, please don’t stay home in November…

Reagan historian Craig Shirley, who literally wrote the book on Reagan’s ’76 campaign, maintains that he never endorsed Ford. “He spoke of many things, about freedom and tyranny and the future. He did not speak of or even endorse the candidacy of Gerald R. Ford for president of the United States,” he wrote back in March. In recent days, he tweeted that Reagan never endorsed Ford even after the convention.

Interesting story except Reagan never endorsed Ford after the Kansas City convention. Too much water over the dam. https://t.co/HBXmdpDfPm

So there you have it. Cruz’s decision not to endorse Trump was far from unprecedented, and was actually following in the footsteps on the man Trump staffers hold up as the height of civility in politics. And that was a race in which the eventual nominee didn’t call Reagan’s wife ugly and accuse his father of killing JFK.