Louis C.K. Regrets Harsh Comments About Sarah Palin (But Not Enough To Not Make A Few More) 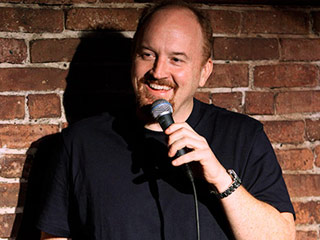 Louis C.K. is one of the funniest comedians working today and his FX show Louie is one of the best comedies on air. I’m not even gonna put a “Columnist” tag on this post since that’s not opinion, that’s fact (ok, fine, it’s my opinion, but it’s pretty darn close to a fact). That doesn’t mean he’s perfect though. He can make mistakes and he’ll admit them. One such mistake? Getting drunk on a plane and Tweeting graphic insults about Sarah Palin just days before going on The Tonight Show and guesting alongside Bristol Palin. In an interview with GQ, C.K. describes why he regrets saying what he did.

It appears it wasn’t as much the content of what he said that he regretted, but that he entered into an arena he didn’t need to. He tells GQ that he isn’t a “political comic” and that he always liked having credibility with the right wing and getting good notices from people like Andrew Breitbart (For instance, unlike many other edgy comics these days, some of C.K.’s best television appearances are on the Middle America-favoring Tonight Show while this typically thoughtful scene from his own show depicts the arrogance and silliness of both political spectrums). Therefore, he hated that Big Hollywood was now pegging him as some kind of “gatekeeper of Obama.” He also explains that the only angry letter he’s ever responded to was from a Palin fan and father of a Down Syndrome afflicted child.

Don’t think, however, that this means C.K.’s gone soft on Palin herself. He’s still not a fan:

“We sat there suspended for a moment in earnestness, looking at each other over the table like, Life, huh? It’s just a bunch of relentless punches to the junk. And then he added: ‘All that other shit, though, saying Palin had a Chinese family in her vagina and whatever, I don’t regret that. It’s comedy. I have said many indefensible things onstage. It’s fucking comedy. Plus, I do believe if she got elected, she’d really Hitler up the place.'”

It’s an interesting read from an interesting man and you should check it out. And, once again, if you’re not watching his FX show yet, you’re the one who should be apologizing in nationally-published magazines.

Watch the clip with Bristol from NBC below: