AG Barr Claims He’s Defending the Presidency, Not the President: ‘Rules Were Being Changed to Hurt Trump’ 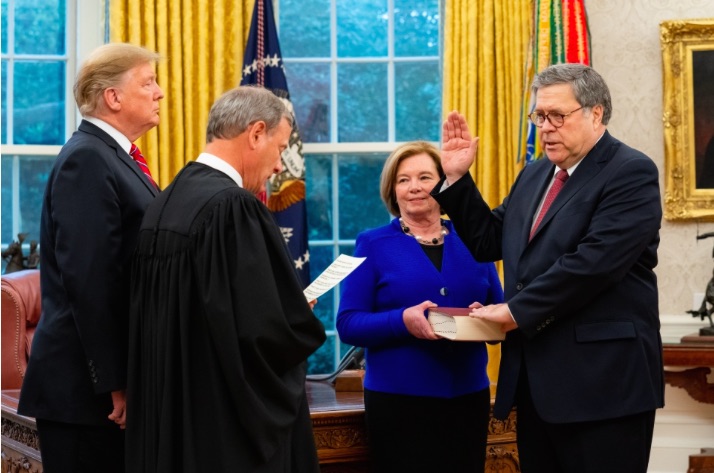 In an interview with the Wall Street Journal, Attorney General Bill Barr defended his aggressive posture against Congressional investigations of the White House : “I felt the rules were being changed to hurt Trump, and I thought it was damaging for the presidency over the long haul.”

Speaking to the newspaper during a recent trip to Central America, Barr explained his belief in a need for a strong executive branch that is not beholden to legislators when it comes to running the country. “At every grave juncture the presidency has done what it is supposed to do, which is to provide leadership and direction,” Barr told the Journal.

Last summer, while still a private attorney, the former attorney general famously sent a long, unsolicited memo to the Justice Department, in which he blasted the Special Counsel’s investigation of Donald Trump and his campaign as well as staked out legal arguments that give the White House broad exemptions from charges of obstruction of justice. Many Democrats have equated the memo as Barr’s attempt to publicly lobby for the job of attorney general, since Trump had long expressed dissatisfaction at his previous attorney general, Jeff Sessions, for his decision to recuse himself from the Mueller probe.

Barr’s portrayal as an aggressive defender of the this White House began after he issued a four-page memo summarizing the Mueller report weeks before the findings were made public. That memo and two public press conferences he conducted in the lead up to the report’s release have subsequently drawn heavy criticism for misrepresenting the report’s damning details. In addition, his recent comments that there was “spying” by law enforcement on the 2016 Trump campaign and his decision to appoint a U.S. attorney to investigate the origins of that FBI probe — a move Trump has long called for — has sparked outrage from Democrats and longtime law enforcement officials as a politically motivated intimidation tactic.

The attorney general has also defended the Trump administration’s broad refusals to comply with Congressional subpoenas seeking more information from the White House on a host of topics. In the Journal interview, Barr couched these stances as part of  larger struggle over Constitutional powers: “If you destroy the presidency and make it an errand boy for Congress, we’re going to be a much weaker and more divided nation.”