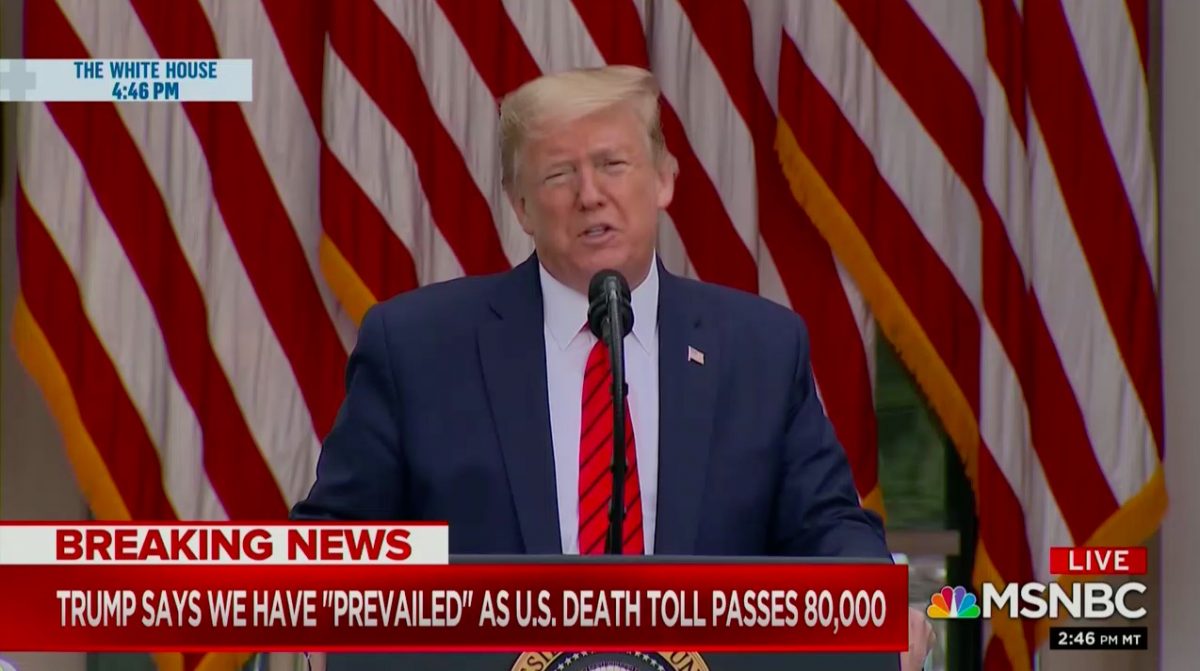 President Donald Trump commented on his abrupt ending to Monday’s press conference in which he appeared to walk out of the event instead of answering entirely reasonable questions asked of him. It was the first White House first Coronavirus Task Force press conference in roughly two weeks and was designed to bring attention to progress made on nationwide coronavirus testing.

After the event turned to questions from assembled press, CBS News’ Weijia Jiang asked Trump about his touting of U.S. testing numbers, saying. “Why does that matter?” she asked. “Why is this a global competition to you if every day Americans are still losing their lives and we’re still seeing more cases every day?”

“They’re losing their lives everywhere in the world. And maybe that’s a question you should ask China. Don’t ask me. Ask China that question, okay?” Trump responded. “When you ask them that question, you may get a very unusual answer.”  He tried to move on, gesturing to another reporter and saying, “Yes, behind you, please.”

CNN’s Kaitlan Collins was next up and she tried to ask Trump a question. When it seemed like he was going to move on, Collins said, “You pointed to me. I have two questions, Mr. President.” “Next, please,” Trump replied, to which Collins reminded “You called on me.”  Trump then abruptly ended the press event and left. It was not a moment in which the President covered himself with glory, and left pundits on both sides blaming either the press or the president for untoward behavior.

Not one to avoid any conflict that includes himself, Trump weighed in, and in an admittedly predictable manner, blamed the media for conspiring against him while retweeting the clip from vocal Trump critics and Vox contributor Aaron Rupar. Trump tweeted.

The Lamestream Media is truly out of control. Look how they work (conspire!) together. They are the Enemy of the People, but don’t worry, we will WIN in November! https://t.co/3YOSChXP9M

Trump and his allies seem to be of the mind that the White House press corps should treat the president in a more friendly and promotional manner. This ignores, however, the long-standing tradition of the fourth estate, in which the press is supposed to speak truth to power.

A relevant quote often attributed to George Orwell states  “Journalism is printing what someone else does not want printed; everything else is public relations.” Replace “print” with “ask” and one can better understand the basic rift between the president and the media.