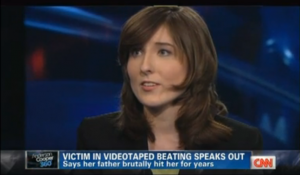 On Thursday evening, CNN’s Anderson Cooper sat down with Hillary Adams, the daughter of the Texas family court judge shown beating with a belt her in a now widely-circulated video .

Hillary explained that her father’s methods of castigating her had devolved from merely “corporal punishment” to full-blown physical abuse over the years and that, the night of the recorded beating — sensing that her father was growing angry and violent — she had set up a camera in advance to capture evidence of one of her father’s outbursts, knowing only that she wanted to have the footage on hand at some point.

RELATED: After Police Investigation Opens, Texas Judge Responds To Beating Video: ‘It’s Not As Bad As It Looks On Tape’

Judge Adams has spoken out about the tape, saying that the beating was “not as bad as it looks” in the footage — a statement that, for Hillary, indicates that her father is in deep denial about the abuse.

A teen at the time of the recording, Hillary held on to the tape for seven years, deciding to release now because she had, she says, “finally snapped” and wanted to confront her father about his denial in the hope that the two would be able to reconcile.

Cooper also showed Hillary a statement released by her father in which he accuses her of releasing the video as revenge for having cutting her off financially and for telling her to stop “partying.” Hillary felt his statement was typical of the way he would twist stories to keep up appearances. What’s more, she said, her father would often use the gifts he gave her (including a Mercedes Benz) as a means of lording his power over her.

Cooper continued reading the statement, which included an accusation that Hillary is exploiting her cerebral palsy to gain sympathy with the media. “Wow,” she responded. “That’s incredible. Did you know that he’s always denied that I even had a problem? This is the first time he’s ever written that I had something.”