‘Are You High?!’ Anderson Cooper Mocks GOP Strategist Who Said Ted Cruz Is ‘Having Bunny Sex’ 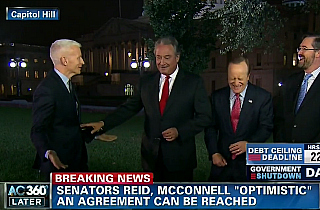 Castellanos agreed with his Democratic counterpart Paul Begala that Cruz is behaving in a short-sighted manner by shutting down the government to expand the conservative base.

As such, the GOP strategist recalled a bizarre analogy. “A friend explained to me today, finally, what Ted Cruz is doing,” he said. “And I finally understand: He’s having bunny sex.”

While Begala let out a confused chuckle, Cooper looked down at his watch and joked: “This is the late-night edition of 360.”

But Castellanos was persistent. And his attempt to explain the bunny sex analogy resulted in this humorous exchange:

CASTELLANOS: In nature, there are boom-and-bust cycles. The snowshoe hare, every ten years, multiplies sixfold.

COOPER: Are you high?

A few minutes later, the segment ended with Cooper ribbing Castellanos over what had just happened:

COOPER: Gentlemen, thank you. Alex, I’m still trying to figure out what the bunny sex was about.

COOPER: I definitely did not learn that in my class.