Bill Kristol Continues Attack On GOP: They Are ‘Going Into Contortions’ To Avoid Increasing Taxes For Wealthy
video

Bill Kristol Continues Attack On GOP: They Are ‘Going Into Contortions’ To Avoid Increasing Taxes For Wealthy 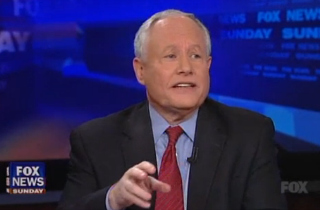 Appearing on Fox News Sunday this morning, neoconservative commentator Bill Kristol took another shot at the Republican Party, accusing them of wildly contorting themselves so as to not raise the top income tax rate while somehow raising tax revenues.

Host Chris Wallace mentioned the idea that has been bandied about among Republicans on Capitol Hill that instead of increasing the top marginal tax rate, the highest income earners could simply pay 35% tax on all of their income across the board.

Kristol blasted the idea, saying that “the Republicans are going into contortions to try and not to raise the top rate while, in fact, trying to produce more revenues […] and produce them from the wealthy since they’re scared of being accused of attacking the middle class.”

He continued on to reiterate his belief that the Republicans should cave in a bit on taxing the top income bracket a bit more, while criticizing the party for its dogmatic resistance to such an idea: “If they want to find some complicated way to get more revenues, I think it’s probably easier just to give in a little bit on the top rate. But they’ve made that a matter of dogma. And I’m not going to break my own sword on telling them not to break their sword on it.”

Kristol then bemoaned the fact that both parties seem willing to allow the payroll tax to go up in January, adding that by not opposing that increase, Republicans have missed “a huge opportunity here to be champions of the working class and the middle class instead of screaming and yelling about millionaires.”