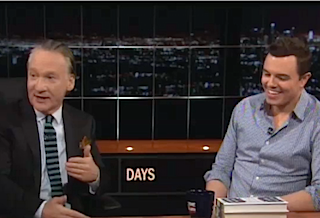 “If it was the only thing that movie won, it was gonna win Best Picture,” Limbaugh said of the film the day after the ceremony. “It had the magic word in the title: ‘Slave.’”

“I saw everyone on MSNBC went nuts that he said this,” Maher remarked, before noting that he sent out some not so dissimilar tweets from the Vanity Fair party. “I basically said the same thing.”

Jus sayin- if a guy ran in right before best picture and said 'wait, i gotta movie about a retarded guy in the holocaust…'

“What the liberals didn’t understand,” Maher explained, “is that this not a comment on the validity of the movie — and I don’t like Rush Limbaugh either — this is a comment on the predictability of Hollywood liberals who conflate a cause with performance.”

MacFarlane mostly agreed, saying, “Of all the things that Rush has said that I don’t agree with, that’s not the most unreasonable.” At the same time, he added that he did think 12 Years a Slave was the “best movie of the bunch.”