Bill Maher On Internet Piracy: ‘I Call It Caucasian Looting’ 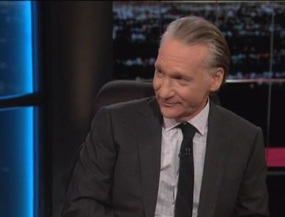 During an ill-informed rant about the Stop Online Piracy Act SOPA on Friday night’s Real Time, host Bill Maher dropped in one of the more appallingly casual racist remarks I’ve heard in a long time. Speaking about the “moral dimension” to the online piracy debate, Maher said, “I call it ‘Caucasian looting,’ to laughs from panelist Buddy Roemer, and shocked silence from former Michigan Gov. Jennifer Granholm. It’s just the latest example of Maher’s affection for racial stereotypes.

The right loves to hold up the frequently over-the-line things that Bill Maher says as examples of “lefty hate,” but just because he spends most of his time attacking Republicans doesn’t mean he’s one of us. Politically, he’s a left-leaning libertarian (“libertarian” is a word for conservatives who reserve the right to smoke pot and screw), but philosophically, he’s a privileged contrarian dick. His SOPA rant is perfect evidence of this, as he begins by stipulating that he knows nothing about the proposed legislation, then gives his uninformed opinion, anyway.

That opinion appears to be that online piracy costs him money, so even if the proposed law might chill free speech (again, without bothering to read it), let’s not be too hasty. “Moral dimension” notwithstanding, most of the people who watched Religulous for free online probably weren’t the same people who would have otherwise paid twenty bucks for the DVD, so Maher should calm down about the real dollars he lost. Online piracy is wrong, but as today’s Up with Chris Hayes panel pointed out, it’s not nearly worth the risk this proposed solution presents.

Of a piece with that sense of entitlement (to a completely uninformed opinion, to even more money than he’s already got, possibly at the expense of free speech) is Maher’s remark about “Caucasian looting,” which not only posits IRL looting as the exclusive province of black people, but conversely evinces a belief that black people generally lack the capability or opportunity to engage in online piracy. From Maher’s perch, he’s not insulting black people, he’s simply slamming white people using an observation that, let’s face it, “we” all know is true, wink, wink. It’s the flip-side of the so-called “race realism” that Newt Gingrich is driving ’em wild with down in South Carolina.

In much the same way, Maher probably views his constant references to President Obama as a ghetto gang thug as compliments, “positive” uses of stereotypes to illustrate the President’s toughness. It helps to be part of a racial majority for whom no such marginal character exists.

Because he’s so very good at trashing Republicans, Maher doesn’t take much heat for this sort of thing from the left. That’s a shame, because Maher is an often-gifted comedian and sharp cultural critic whose gender and race issues severely undermine him. If the people he listens to would call him out on it, maybe Bill Maher would adjust his attitude.

Here’s the clip, from HBO: