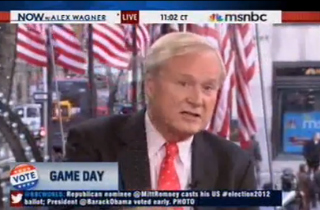 Are you one of the many voters who feels disillusioned with the two-party system and wants to make your single, solitary voice heard by voting for a third party candidate who is possibly more aligned with your own viewpoints?

If you are, well guess what: YOU’RE AN IDIOT. Says MSNBC’s Chris Matthews.

Appearing on this afternoon’s NOW with Alex Wagner panel on MSNBC, the firebrand Democrat went on a truly sanctimonious, condescending rant against “idiots” (like this writer) who vote for third party candidates or stay home on Election Day.

“If you don’t vote you’re an idiot,” began Matthews’ rant. Wagner agreed with him on that particular name-calling.

“This drives me crazy,” he continued before bizarrely saying that it’s “the lovers” who don’t show up — the people who say “I had to check my e-mail or text something” or “I thought I’d work out or meet somebody for a drink.”

“If you don’t vote, I don’t want to talk to you,” he continued. As a protest move, I abstain from voting (see here for a good explanation why), so color me happy. But anyway… the rant continues:

Then, looking directly into the camera, Matthews held up his fingers and said: “You have two choices.”

If only Matthews realized how neatly he was summing up the entire problem with our electoral system that has become stuck in favor of two behemoth parties that rarely represent the interests of its own constituents yet keeps them ensnared in a Stockholm Syndrome of sorts.

Matthews’ screed also represents the exact old world media attitude towards third parties that prevents them from obtaining any credibility on the national stage. Sure, third parties tend to nominate dopey characters and uncharismatic ideologues, but that’s because there’s no incentive to actually put up a serious candidate. When the press, by and large, is complicit in maintaining a two-party horserace, why bother investing your time and energy in third parties?

I am really bothered by people who thought, ‘Oh, I thought I would vote for [former third party candidate] John Anderson,’ or, ‘I really like Ralph Nader and what he stands for.’ That has nothing to do with the presidency! Nothing to do with it. But it’s screwed up so many of our elections, people being so NPR, so PBS, so hoity-toity.

Of course, looking at it through the prism of wanting your guy to win (which is pretty much what Matthews only ever does) then of course you’ll see it that way. If you wanted nothing more than for Al Gore to win in 2000, then obviously you’re going to resent Nader and those “hoity toity NPR” listeners who voted for him.

And knowing how much Matthews actively cheerleads for Team Blue, it’s pretty safe to bet that if Libertarian Party candidate Johnson happens to “steal” the election out of Mitt Romney‘s hands this year, Matthews wouldn’t be so quick to demean third party voters. In fact, they would be his godsend.

Say, third parties, this could be a great new slogan for you, like: “Vote Libertarian, Annoy Chris Matthews!”