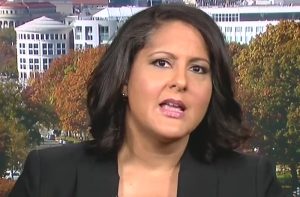 In an interview with CNN Newsroom Wednesday, Hillary Clinton senior advisor Karen Finney blamed the Democratic candidate’s loss on the fact that male supporters of Bernie Sanders made young women feel hesitant to express their support for Clinton online.

Finney was asked what factors she believed contributed to Clinton’s loss. “Electing the first woman president was always going to be tough,” she responded. “I think given the level of sexism and misogyny that we saw come to the surface and be very public, I think that supports the fact that in this country, we are going to have to have a real conversation about that.”

Host John Berman returned to that point a few minutes later. “You said you thought that sexism and misogyny may have played a role in Hillary Clinton’s defeat… What evidence do you have that voters made their decisions based on sexism or misogyny?” he asked.

“I think one of the things we never really had a conversation about– but again, I think going forward we should talk about– is how this country, how people feel about women in power,” Finney repeated.

“Some of my colleagues won’t like this, but I think even in the primary, some of what we saw with the Bernie Bros had a real chilling effect on a lot of women, and young women in particular,” she argued. “We learned about during the primary, there were a number of these secret Facebook groups of young progressive women who were supporting Hillary, but frankly they didn’t want to deal with the backlash online from some of the Bernie Bros.”