CNN Guest Full of Great Advice: Get Away From Shooter, How to Sneak Guns Into Navy Yard

CNN Guest Full of Great Advice: Get Away From Shooter, How to Sneak Guns Into Navy Yard 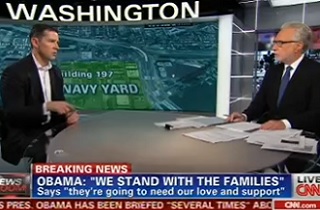 The still-unfolding mass shooting at the Washington Navy Yard is one of the rare stories that actually merits the wall-to-wall cable news treatment, but which is still susceptible to that medium’s unforgiving need to fill every second of time. For example, CNN’s Wolf Blitzer hosted a guest, Monday afternoon, who dispensed this pearl of wisdom: “What people want to do in this situation is want to move away from the threat. If you see somebody that has a gun, get away from that person as fast as possible.”

Since he stopped short, I will helpfully add that you should also not try ironing your clothes while you’re wearing them.

The guest, former Navy SEAL and current reservist Matt Maasdam, also answered Wolf Blitzer’s questions about security at the facility, where Maasdam says he was stationed for six months.

“What is it like, the security on a normal day, assuming there’s no threat, for example?” Blitzer asked.

“The security is like any other base,” Maasdam said. “They check your ID when you come in. And that’s pretty much it, as long as you look like who you say you are on your ID, they let you through you.”

“Do you have to go through magnetometers or anything like that?” Blitzer asked.

“You don’t. You don’t open your bags or your car. If somebody, and this is pure speculation, wanted to bring a gun in in their car, and they were going there routinely, they could do that,” Maasdam explained.

“There’s parking on the base for those accredited to go on the base,” Blitzer added.

Blitzer and Maasdam also noted that the Navy Yard is in a resurgent part of the District. “It’s a great part of town,” Maasdam said. “It feels safe all the time. So when I take my kids down there, on Friday nights for concerts and that kind of thing, it’s great. I’ve never been concerned with anything like this.”