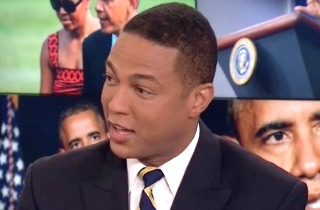 CNN’s Don Lemon was memorably mocked back in March for throwing it out there on live national television that maybe missing Malaysian Airlines Flight 370 was swallowed up by a black hole. CNN Worldwide president Jeff Zucker thought it was stupid, too.

A New York magazine profile on Zucker examines his approach to saturating CNN viewers with wall-to-wall coverage of sensational events and how Lemon’s maybe got too caught up in this case:

The strategy was most vividly on display during CNN’s breathless—and seemingly endless — coverage of the disappearance of Malaysian Airlines Flight 370, lowlighted by anchor Don Lemon speculating on camera that the missing plane might have flown into a black hole. (Zucker was frustrated by the gaffe: “Don, don’t be an idiot.”)

Around the same time of the black hole theory, Lemon had also mused allowed whether the “supernatural” might explain the missing plane.