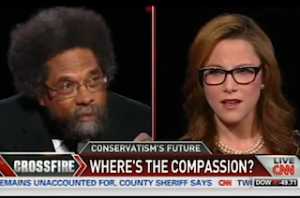 Cornel West has never been President Obama’s biggest champion, but there he was on Crossfire Monday afternoon, defending Obamacare and other policies from conservative attacks by host S.E. Cupp and The Weekly Standard’s Bill Kristol. During the debate, Cupp confronted West over what she saw as a lack of “interest and willingness” for black Democrats to have a dialogue with white Republicans on any number of issues.

“We black folk, we have been some of the most open-minded, forgiving and embracing people in the nation,” West responded. At the same time, he said liberal African-Americans can not just turn a blind eye when Republicans cut food stamps for poor people. “That’s morally obscene and spiritually profane.”

West was willing to blame “neo-liberalism” just as much as “neo-conservatism,” leading to a “privatized, militarized” society that has “devastated” the working-class and “escalated” poverty. When the group began discussing Mitt Romney’s 47% comments from the 2012 election, West said that is part of the “cold-hearted, mean-spiritedness” of the Republican Party.

“It’s just foolish, it’s just silly,” Kristol said of Romney’s comments. “But you can be tough-minded about reforming programs and improving them, targeting them, not having food stamps double over four year without being cold-hearted and mean-spirited.”

But if West couldn’t tie Kristol to Romney, he wasn’t going to pass up an opportunity to bring up Sarah Palin. When Cupp and Kristol tried to explain to West why he should like Palin, who “picked herself up by her bootstraps” to become the powerful political figure she is today, West wasn’t having it.

“Even given her upward social mobility,” West said of Palin, “her sentiments and temperaments side with the well-to-do.” But he did admit that “both parties need to be radically called into question.”