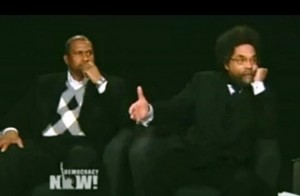 During an interview last week with Democracy Now, author and activist Cornel West offered harsh criticism of President Barack Obama, calling him a “Rockefeller Republican in blackface” and not someone who is actually looking out for the best interests of the impoverished. The prominent social critic also lashed out at black MSNBC personalities, accusing them of “selling their souls” in support of a president who has been anything but progressive.

“I think that it’s morally obscene and spiritually profane to spend $6 billion on an election, $2 billion on a presidential election, and not have any serious discussion,” West lamented to host Amy Goodman. “Poverty, trade unions being pushed against the wall dealing with stagnating and declining wages when profits are still up and the 1 percent are doing very well, no talk about drones dropping bombs on innocent people,” he continued.

He explained that the election season saw a “truncated” version of political discourse with climate change being overlooked.

West then took a stab at the president: “It’s very sad. I mean, I’m glad there was not a right-wing takeover, but we end up with a Republican, a Rockefeller Republican in blackface, with Barack Obama, so that our struggle with regard to poverty intensifies,” he said.

Later on in the interview, West was asked to comment on black MSNBC hosts like Michael Eric Dyson, Melissa Harris-Perry, and Rev. Al Sharpton who regularly praise President Obama. He offered up a similarly harsh critique:

I love Brother Mike Dyson … but we’re living in a society where everybody is up for sale. Everything is up for sale. And he and Brother Sharpton and Sister Melissa and others, they have sold their souls for a mess of Obama pottage. And we invite them back to the black prophetic tradition after Obama leaves. But at the moment, they want insider access, and they want to tell those kind of lies. They want to turn their back to poor and working people.

He concluded by calling those MSNBC’ers “apologists” for the Obama administration despite having a rigorous background in progressive critical thought.